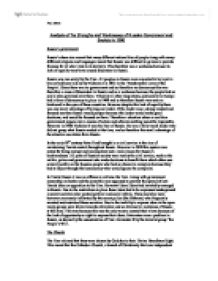 Analysis of the Strengths and Weaknesses of Russian Government and Society in 1900 Russia's government Russia's sheer size meant that many different nationalities of people along with many different religions and languages meant that Russia was difficult to govern to provide fairness for all who lived in its territory. This therefore was a weakness because its lack of equality may have caused discontent in Russia. Russia was run solely by the Tsar. All peoples in Russia were expected to be loyal to him as had been laid out by Nicholas I in 1832 in the 'Fundamental Laws of the Empire'. Since there was no government and so therefore no democracy this was therefore a cause of discontent in Russia and so a weakness because the people had no say in who governed over them. Virtually all other large states, particularly in Europe had a form of democracy in place in 1900 and so therefore Russia was seen as backward in the eyes of these countries. However despite this lack of equality there was one small advantage of having one leader. If the leader was a strong minded and focused one then Russia would prosper because this leader would make good decisions, and would be focused on them. ...read more.

The Church had played a great influence on the peoples of Russia and its art and music had defined Russian culture. This connection of the Church with the people had been an advantage as it offered a way of controlling people. However in the 19th century it had become very detached from the Russian way of life. It was very conservative and wouldn't support any political change. This therefore lost the Church support since they gave no support to political activists. Also it was detached from ordinary Russian people, with one suburb with 40,000 people having one church and one priest. This therefore was a weakness because without input from the church to the people then the message that the Tsar was Gods anointed did not across meaning the Tsars position was weakened. There were some priests who sympathised with the liberal ideas of Russians however they couldn't show them support for fear of disobeying the Church of which they were a part. Russia's economy A large proportion (82%) of the Russian people were peasants, who were agricultural workers and land workers. With only 4% of the population being urban workers, such as factory workers, it shows how the economy of Russia was agricultural based. ...read more.

Past attempts to educate peasants had been ruined by the fear among the higher classes that any improvement in their condition may threaten the higher classes' position. They feared the peasants may realise their potential power and therefore threaten the privileges that the higher classes enjoyed. This lack of education was a weakness as it prevented advancements in things such as agricultural techniques. Peasants were kept in check by conscription into the army, and was also a punishment for criminals. The conditions in the army were horrific, with extremely tough discipline and grim conditions in which the armed forces had to live. These conditions had led to the deaths of 1 million soldiers in peacetime in the reign of Nicholas I. The belief that Russia needed a large full-time army rather than having a large reserve like in other European countries was a drain on the Russian economy and cost the government 45% of its annual expenditure. The army was weakened because the higher ranks of the army were made up from the aristocracy. This meant that there was no promotion on merit, and rank was gained by the buying and selling of commissions. This weakened the army as a fighting force and so was clearly a negative factor. ?? ?? ?? ?? Paul Marie ...read more.