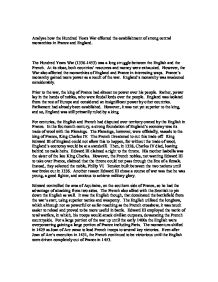 Analyze how the Hundred Years War effected the establishment of strong central monarchies in France and England.

Analyze how the Hundred Years War effected the establishment of strong central monarchies in France and England. The Hundred Years War (1336-1453) was a long struggle between the English and the French. At its close, both countries' resources and money were exhausted. However, the War also affected the monarchies of England and France in interesting ways. France's monarchy gained more power as a result of the war. England's monarchy was weakened considerably. Prior to the war, the king of France had almost no power over his people. Rather, power lay in the hands of nobles, who were feudal lords over the people. England was isolated from the rest of Europe and considered an insignificant power by other countries. Parliament had already been established. However, it was not yet superior to the king, and so, England was still primarily ruled by a king. For centuries, the English and French had disputed over territory owned by the English in France. In the fourteenth century, a strong foundation of England's economy was its trade of wool with the Flemings. ...read more.

The English utilized the longbow, which although not as powerful or as far-reaching as the French crossbow, it was much easier to reload and proved to be more useful in battle. Edward III employed the tactic of total warfare, in which, his troops would attack civilian outposts, devastating the French countryside. For a large portion of the war up until the early 1400s the English were overpowering gaining a large portion of France including Paris. The momentum shifted in 1429 as Joan of Arc came to lead French troops to several key victories. Even after Joan of Arc's execution in 1431, the French continued to be victorious until the English were driven completely out of France in 1453. All the fighting of the Hundred Years War had been on French soil. And so, at the war's end, the entire French countryside was devastated by years of battles and pillaging. France had taken a crippling blow to its economy, but in the long run it was strengthened. Before the war began, the common people held more allegiance to their nobles than to the king due to feudalism. ...read more.

In France, the war shifted power from the nobles to the king. In England, power was exchanged between the king and Parliament. While the war exhausted each country's resources, both nations ended up benefiting. Multiple Choice Questions 1. Which of the following was NOT a cause for the Hundred Years War: a. Wool trade between the English and the Flemings. b. Dispute over English owned land in France. c. Dispute over the French throne d. King Philip's quest for world domination 2. Which of the following was a factor of England's early success in the War: a. English use of the longbow over the French crossbow b. The superiority of England's navy c. English soldiers were better trained d. King Philip was on vacation 3. Who played a major role in shifting the momentum of the War from England to France: a. Edward III b. Joan of Arc c. Queen Isabella d. Charles IV 4. What was a major affect of the Hundred Years War a. England gained much French territory b. France's monarchy was crippled c. England's Parliament gained more influence d. France stole England's idea for French Fries Answers: 1d, 2a, 3b, 4c ...read more.