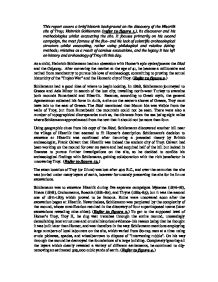 Ancient Discoveries: Troy. This report covers a brief historic background on the discovery of the Hisarlik site of Troy; Heinrich Schliemann (refer to figure 1.), its discoverer and his methodologies whilst excavating the site. It focuses primarily on his

This report covers a brief historic background on the discovery of the Hisarlik site of Troy; Heinrich Schliemann (refer to figure 1.), its discoverer and his methodologies whilst excavating the site. It focuses primarily on his second campaign, the most famous of the five- and his lack of scientific archaeological structure whilst excavating, rather using philological and relative dating methods; mistakes as a result of careless excavations, and the legacy it has left on history and archaeology of Troy till this day. As a child, Heinrich Schliemann had an obsession with Homer's epic cycles/poems the Iliad and the Odyssey. After cornering the market at the age of 41, he became a millionaire and retired from merchantry to pursue his love of archaeology, committing to proving the actual historicity of the "Trojan War" and the Homeric city of Troy. (Refer to figure 2.) Schliemann had a good idea of where to begin looking. In 1868, Schliemann journeyed to Greece and Asia Minor in search of the lost city, travelling north-west Turkey to examine both mounds Bunarbashi and Hisarlik. Because, according to Greek myth, the general Agamemnon collected his force in Aulis, a site on the eastern shores of Greece, Troy must have lain to the east of Greece. The Iliad mentioned that Mount Ida was visible from the walls of Troy, but from Bunarbashi the mountain could not be seen. There were also a number of topographical discrepancies such as, the distance from the sea being eight miles where Schliemann approximated from the text that it should not be more than four. ...read more.

Stratigraphy had been observed and understood in the Danish peat bogs, the Jutland barrows, and the prehistoric Swiss Lake dwellings, but Hisarlik was the first large dry-land man-made mound to be dug. Schliemann was no pioneer of the rudimentary scientific archaeology and did not adhere to a scientific method when carelessly excavating Troy. Later on as his career progressed, he eventually enlisted the help of specialists such as Rudolph Virchow (pathologist, anthropologist, pre-historian, biologist), Archibald Sayce (linguist), Max M�ller (German philologist and orientalist), and Wilhelm D�rpfeld. Wilhelm D�rpfeld, a famous architect can be accredited for teaching Schliemann archaeological method, specifically how to dig stratigraphically at Troy, majorly assisting with Troy's stratigraphical dating methodology (and after Schliemann's death was able to determine that Troy VI, not Troy II was most probably Homer's Troy). Ironically, D�rpfeld joined the team around 1882, once Schliemann had already mass-destructively excavated Troy layer-by-layer from top through to bottom. It was then that Schliemann realized that he had gone too far because the settlement at the Hisarlik site predated Troy II by 1,700 years, however all in vain as irreversible damage done to the stratigraphy meant the loss of its multiple cities. A popular tourist attraction, this can still be seen today in Turkey at the ruins of Troy where walls from different historical periods have been excavated. (Refer to Figures 8 and 9.) Many other archaeologists followed Schliemann, conducting more methodical and scientific excavations of lands surrounding the Aegean. Recent archaeology of the classic civilizations of Europe has concentrated on the lives of common citizens. ...read more.

Schliemann, not only argued this using philological comparison to the Iliad, but also proved that Bunarbashi could not be the site of troy, because of potsherds-he found no potsherd older than the fifth or 6th century BC. Ancient Greek historians placed the Trojan War variously in our 12th, 13th, or 14th century BC: Eratosthenes to 1184 BC, Herodotus to 1250 BC, and Duris of Samos to 1334 BC. The legacy of Troy has since prompted Hollywood's "long love affair" with the ancient world- inspiring the genre of the "sword and sandal epics"; and continues to be a popular subject that many Hollywood directors attempt to interpret and reconstruct- despite the highly inaccurate facts regarding characters and the series of events plot development. However, they remain imbedded in our mass media and popular culture; varying from 1950s-1960s classics like that of Ben Hur, Cleopatra, Spartacus, The Ten Commandments or the more contemporary editions such as 2004 make Troy starring the likes of Brad Pitt, Eric Bana, Rose Byrne, and Orlando Bloom. (Refer to Figure 15.) In conclusion, Heinrich Schliemann's discovery of Troy served as a stepping stone in what we know as modern archaeology. He uncovered Troy of Homeric legend and found a new world of recovered history. But the question of if he really did find Homer's city of Troy, no one can know for sure. Whether or not it is, Schliemann definitely won himself a place in history as the "father of archaeology'- and his excavations at Troy are still widely studied by many students; who learn from his mistakes in crude methodology as well as adopt his romance for the lost city (or cities) of troy. ...read more.