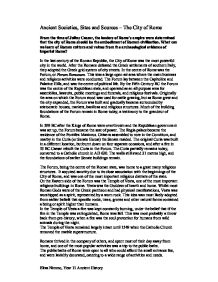 Ancient Societies, Sites and Sources The City of Rome

Ancient Societies, Sites and Sources - The City of Rome From the time of Julius Caesar, the leaders of Rome's empire were determined that the city of Rome should be the embodiment of Roman civilisation. What can we learn of Roman culture and values from the archaeological evidence of imperial Rome? In the last century of the Roman Republic, the City of Rome was the most powerful city in the world. After the Romans defeated the Greek settlements of southern Italy, they adopted the Greek grid system of city streets. In the centre of Rome was the Forum, or Forum Romanum. This was a large open-air area where the main business and religious activities were conducted. The Forum lay between the Capitoline and Palatine Hills, and was the centre of political life. By the Fifth Century BC the Forum was the centre of the Republican state, and operated as an all purpose area for assemblies, lawsuits, public meetings and funerals, and religious festivals. Originally the area on which the Forum stood was used for cattle grazing, but as Rome grew and the city expanded, the Forum was built and gradually became surrounded by aristocratic houses, markets, basilicas and religious structures. ...read more.

On the Eastern side of the Forum was the Temple of Vesta, one of the most important religious buildings in Rome. Vesta was the Goddess of hearth and home. Whilst most Roman Gods were of the Greek pantheon and had physical manifestations, Vesta was worshipped as a spirit, represented by a worn rock. This idea was most likely adopted from earlier beliefs that specific rocks, trees, groves and other natural forms contained a being or spirit higher than humans. In the Temple of Vesta a fire was kept constantly burning, under the belief that if the fire in the Temple was extinguished, Rome was fall. This was most probably a throw back from pre-history, when a fire was the soul protection for humans from wild animals during the night. The Temple of Vesta remained largely intact until 1549 when the Catholic Church removed the marble superstructure. Romans thrived in the company of others, and spent most of their day away from home, and one of the most popular activities was a trip to the public baths. ...read more.

They would then undress and proceed to the calidarium (hot bath) that would loosen the pores and help unclog dirt and grime from the skin. The baths were heated by a hypocaust system. Hot air or smoke from the furnaces (used for heating the warm baths) would pass through gaps left underneath the floor, passing through these areas and out of flues through the roof, thereby heating the rooms to a desired temperature without polluting the air within the rooms being heated. Bathers would then clean their skin with soap or oils, scraping the skin with a specialised device called a strigil, which would scrape the oil containing sweat and dead skin from the body. While the poorer citizens did this task themselves, wealthier Romans had slaves perform this task. This process was then followed by a hot bath (tepidarium), which was then rapidly followed by a dip in the cold baths (fridgiarium). These baths showed a level of sophistication and culture unknown for many centuries after the fall of the Roman civilisation. The archaeological remains of both the Forum Romanum, and the remains of the many Roman baths that have survived over the centuries are a tribute to the power and architectural supremacy of the Roman Empire. ...read more.