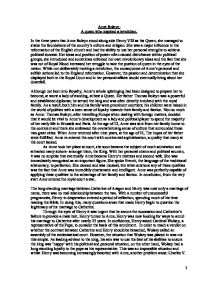 Anne Boleyn - A queen who inspired a revolution.

Anne Boleyn: A queen who inspired a revolution. In the three years that Anne Boleyn stood along side Henry VIII as his Queen, she managed to shake the foundations of the country's culture and religion. She was a major influence in the reformation of the English church and had the ability to use her personal strengths to achieve political success. Her ideas and position of power often caused disturbance within political groups, she introduced and sometimes enforced her own revolutionary ideas and the fact that she was not of Royal Blood increased her struggle to take the position of queen in the eyes of the nation. While not deliberately inciting a revolution, the consequence of Anne's personal and selfish actions led to the England reformation. However, the passion and determination that she displayed both in the Royal Court and in her personal affairs would eventually bring about her downfall. Although not born into Royalty, Anne's whole upbringing had been designed to prepare her to become, at worst a lady of standing, at best a Queen. Her father Thomas Boleyn was a powerful and established diplomat; he served the king and was often directly involved with the royal family. As a result, both him and his family were prominent courtiers; his children were raised in the world of politics with a keen sense of loyalty towards their family and faction. Non so much as Anne: Thomas Boleyn, after travelling Europe when dealing with foreign matters, decided that it would be vital to Anne's development as a lady and political player to spend the majority of her early life in Brussels and Paris. ...read more.

The book had been banned in England, despite this, Anne took it upon herself to bring it into the royal court and to bring its content and message to the attention of Henry, who soon complied with Anne's obvious belief in the message conveyed in the text. In 1530, Anne began to steer the problem in a radical new direction. In continuing her campaign, Anne began to lay the foundations for a protestant England. Anne had built up a group of Protestants within the Royal Court. Three of the most powerful and influential members of this group were Matthew Parker: a man who gathered such a deep sense of trust from Anne, that she left the education and welfare of her daughter in his hands. Secondly, Thomas Cranmer: who became the Archbishop of the reformed church and finally Thomas Cromwell whom replaced Wolsey as Henrys 'right hand man', and who was a major influence in events that followed. In 1533 an event marked the affirmation of the break from the Catholic Church and Rome. Anne and Henry were finally married. Strangely, the ceremony was kept secret, showing that Henry was still dubious as where he stood with the Catholic Church and still had concerns about the validity of his contract with Catherine. These worries were soon repressed however. With the news that Anne was pregnant, Henrys hopes for a male heir refuted any other concern and so, the Boleyn faction continued to grow in influence and Anne decided to take a major risk. ...read more.

These absurd tales of Anne's crimes were mostly unbelievable but yet provided the perfect opportunity for her to be overthrown. Within days of the 'confessions' made by Smeaton, both Anne and five men were tried for high treason. On the 21st May 1536 Anne was executed along side her brother, Henry Norris, Mark Smeaton and two other men, all of whom were probably innocent of the crimes they had been accused. The entirety of this bloody drama that endorsed Anne's dramatic downfall was the creation of Thomas Cromwell. At much the same time as Anne's downfall, opposing factions to that of the Boleyn's were playing a major part in influencing Henry and the general ideas of the court. In order to strengthen their own position, a rival faction dedicated to Catherine of Aragon introduced a young Jane Seymour to the scene, a woman who almost instantly caught the attention of Henry. His hopes for a male heir were once again possible of coming true and Anne, with all her charisma and intelligence was soon forgotten. In conclusion, Anne Boleyn was a woman who had great and revolutionary ideas, the enforcement of which she could only sustain for a while. The enemies she made in order to achieve such 'greatness' soon returned with vengeance and removed her from her position of both Queen of England and wife of Henry VIII. The consequence of her actions however stained the history of England and the question still arises as to weather Anne, the mother of the reformation gave birth to a revolution or a plague that would haunt England and its politics for eternity. 1 1 ...read more.