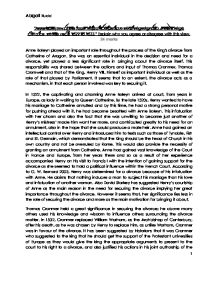 &quot;Anne Boleyn was the most important person in bringing about the King's divorce in the years 1529 to 1533.&quot; Explain why you agree or disagree with this view.

"Anne Boleyn was the most important person in bringing about the King's divorce in the years 1529 to 1533." Explain why you agree or disagree with this view. 24 marks Anne Boleyn played an important role throughout the process of the King's divorce from Catherine of Aragon. She was an essential individual in the decision and need for a divorce, yet played a less significant role in bringing about the divorce itself. This responsibility was shared between the actions and input of Thomas Cranmer, Thomas Cromwell and that of the King, Henry VIII, himself as important individual as well as the role of that played by Parliament. It seems that to an extent, the divorce acts as a mechanism, in that each person involved was key to securing it. In 1522, the captivating and charming Anne Boleyn arrived at court, from years in Europe, as lady in waiting to Queen Catherine. By the late 1520s, Henry wanted to have his marriage to Catherine annulled and by this time, he had a strong personal motive for pushing ahead with it, he had become besotted with Anne Boleyn. This infatuation with her charm and also the fact that she was unwilling to become just another of Henry's mistress' made him want her more, and contributed greatly to his need for an annulment, also in the hope that she could produce a male heir. ...read more.

The major breakthrough to the divorce issue came from the influences of Thomas Cromwell when he was made Henry's chief minister, following that of the role of Cardinal Worsely. In 1531 Cromwell saw that the Pope would not rule in Henry's favour and so a break from Rome and the Church was essential in securing a divorce from Catherine. Cromwell was able to describe his ideas clearly to Henry in a manner that the King could understand, with a take and influence on the fact that Henry would become Supreme Head of the Church. What Cromwell was suggesting was so big that Henry was very cautious in his approach on the idea and it took time to fully convince the King of such decision. Cromwell also suggested a highly innovative solution and gave the idea that it would go through Parliament and would stand with a stronger argument, and show more support as it would have been voted for accordingly and not just have been a movement of a just a few people. In March 1533, Parliament passed the Act in Restraint of Appeals, which stated that the final authority in all legal matters, whether they were civil or clerical, resided in the monarch and that it was illegal to appeal to an authority outside of the kingdom on any such matters, essentially meaning that of the power in Rome. ...read more.

they act as either the means for the need to a divorce or an obstacle while trying to bring the divorce about. Anne did cause quite a stir which essentially resulted in the King's divorce from Catherine of Aragon. She was captivating and charming on her arrival at court in 1522, and was essentially a strong personal motive of Henry's for pushing ahead with his divorce. This infatuation with Anne was a significant factor involved in Henry's decision for a divorce, however there seems a greater impact on the matter from other characters providing their individual influences on the King. By 1532, Cromwell, with the help of fellow reformist and new Archbishop of Canterbury Thomas Cranmer, was able to pass statutes through Parliament that allowed England to brake off from papal authority and establish a church of their own. This allowed Henry VIII to annul his marriage to Catherine on the basis that she had once been married to late elder brother Arthur and marry Anne Boleyn. In terms of the statement made, essentially I disagree with this view in that it appears Anne was a trigger for the decision of a divorce and as an individual pushed forward the matter, however it seems that in actually bringing about the divorce, the people such as Cranmer, Cromwell and Parliament play a more significant role and that without the efforts of each other, there would have been no divorce. ?? ?? ?? ?? Abigail Rudd 1 ...read more.