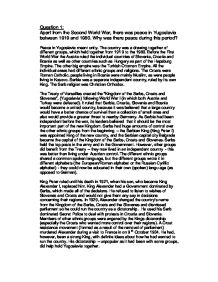 Apart from the Second World War, there was peace in Yugoslavia between 1919 and 1980. Why was there peace during this period?

Question 1: Apart from the Second World War, there was peace in Yugoslavia between 1919 and 1980. Why was there peace during this period? Peace in Yugoslavia meant unity. The country was a drawing together of different groups, which held together from 1919 to the 1980. Before the First World War the Austria ruled the individual countries of Slovenia, Croatia and Bosnia as well as other countries such as Hungary as part of the Hapsburg Empire. The other big empire was the Turkish Ottoman Empire. All the individual areas had different ethnic groups and religions. The Croats were Roman Catholic, people living in Bosnia were mainly Muslim, as were people living in Kosovo. Serbia was a separate independent country, ruled by its own King. The Serb religion was Christian Orthodox. The Treaty of Versailles created the "Kingdom of the Serbs, Croats and Slovenes", (Yugoslavia) following World War I (in which both Austria and Turkey were defeated). It ruled that Serbia, Croatia, Slovenia and Bosnia would become a united country, because it was believed that a large country would have a better chance of survival than a collection of small ones and also would provide a greater threat to nearby Germany. As Serbia had been independent before the war, its leaders believed that it should be the most important part of the new Kingdom. Serbs had huge amounts of control over the other ethnic groups from the beginning - the Serbian King (King Peter I) was appointed King of the new country, and the Serbian capital city Belgrade became the capital of the Kingdom of the Serbs, Croats and Slovenes. Serbs held the top posts in the army and in the Government. However, other groups did benefit from the Treaty - they now lived in an independent country - this was better than living under Austrian control. The different ethnic groups shared a common spoken language, but the different groups wrote it in different alphabets (the European/Roman alphabet or the Russian Cyrillic alphabet) ...read more.

The Slovenes had always resented Serb dominance and they had very strong, and powerful nationalist movements. Croatia too gained their independence in January 1992, following a longer seven-month war, and also after losing 33% of land to Serbia. There were Serbs living in Croatia, but they were a minority. The Serbs had a number of disputes over where the Serb/Croat boarder lay. Like Slovenia, the Croats had strong nationalist movements and a resentment of Serb dominance. These were both relatively minor conflicts. In 1992, Bosnia too declared itself as an independent country following a referendum. However, unlike Slovenia and Croatia, Bosnia had a mixed population - 1.9 million Muslims, 1.3 million Serbs and 0.75 million Croats. Both the Muslims and the Croats were in favour of independence, but the Bosnian Serbs refused to vote, as they wanted to keep Bosnia linked to Belgrade (the Serbian and Yugoslav capital). The Serbs therefore lost the referendum (the combined votes of the Croats and Muslims produced a majority) and the country was rewarded international recognition. Serbia was determined to keep all Serbs together and a Serb called Radovan Karadzic led the Bosnian Serbs in forming an Army and attacking Sarajevo (Bosnia's capital) and other Muslim or Croat occupied towns. Slobodan Milosevic (the President) ordered the Yugoslav Army to help. Serbs had gained control 70% of Bosnia at one stage. The Serb weapons were superior to any of those owned by the Muslims or the Croats. The aims of the Serbs was to conquer as much land as possible and to remove all non-Serbs from the area with a method they called 'ethnic cleansing'. This involved clearing villages of anyone who had an ethnic background, which was not Serb and often included shooting civilians - especially of men. At one incident it is thought that more than 7000 men were mass murdered in this way. As the stories of ethnic cleansing spread around the world, counties who had previously refused to become involved sent soldiers to act as peacekeepers in Bosnia. ...read more.

Last year (2001) the Albanian National Liberation Army or the NLA attacked towns and villages near the Albanian border in an attempt to overtake them so that they could become part of Albania (which is a separate country). In March 2001 Macedonian forces bombarded Selce, the village in which the NLA has its base. It is these religious and ethnic differences that present a possible threat to Macedonia's peace. Ethnic differences have been key in the causing of previous wars in other parts of former Yugoslavia. Therefore there is a significant risk of war in Macedonia - but it is more likely to involve Albania than Serbia. However, if there is war between Macedonia and Albania, it is likely that land will be lost to the Albanians. It is probable that Macedonia will become less powerful and then possible that Serbia will wish to regain its control. Serbia's leadership remains to be an uncertain situation. In October 2000, 8 days of mass demonstrations and strikes were held in Belgrade in attempt to overthrow President Milosevic. These took place following elections in which opposition leader Vojislav Kostunica won 52% of votes - a result that President Milosevic refused to accept. People felt that Milosevic had not listened to his constituency - one man said it seemed as though he (Milosevic) was running Yugoslavia as if he were the only person in it. President Kostunica told crowds "Democracy has happened in Serbia. Communism is falling". President Kostunica now runs Serbia under a democracy and this seems to be stable, but whether it will last or not remains to be seen. In the past the former Yugoslavia only remained peaceful when ruled under a dictatorship - led by Tito. However, Tito was a war hero, and brought economy to Yugoslavia, which made the country and its people wealthier than they had ever been before -this made him popular even though he was a dictator. However this was combined with a strong Secret Police and also threats to anyone who disagreed or spoke out against communism and dictatorships. ...read more.