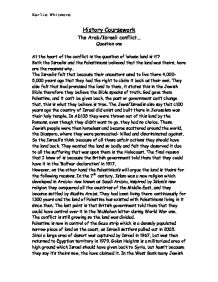 History Coursework The Arab/Israeli conflict... Question one At the heart of the conflict is the question of 'whose land is it'? Both the Israelis and the Palestinians believed that the land was theirs, here are the reasons why. The Israelis felt that because their ancestors used to live there 4,000-5,000 years ago that they had the right to claim it back as their own. They also felt that God promised the land to them, it states this in the Jewish Bible therefore they believe the Bible speaks of truth. God gave them Palestine, and it can't be given back, the past or government can't change that, this is what they believe is true. The Jews/Israelis also say that c100 years ago the country of Israel did exist and built there in Jerusalem was their holy temple. In AD135 they were thrown out of this land by the Romans, even though they didn't want to go, they had no choice. These Jewish people were then homeless and became scattered around the world, the Diaspora, where they were persecuted- killed and discriminated against. So the Israeli's think because of all those unfair actions they should have the land back. They wanted the land so badly and felt they deserved it due to all the suffering that was upon them in the Holocaust. The final reason that I know of is because the British government told them that they could have it in the 'Balfour declaration' in 1917. However, on the other hand the Palestinian's will argue the land is theirs for the following reasons. ...read more.

Another large issue that has caused the conflict to grow is Palestinian issue including, camp conditions, refugee problems, the PLO, Yasser Arafat and the Intifada. When the new state of Israel came to existence, over 300,000 Palestinian Arabs fled from the country because they were frightened about what would happen to them. Many fled to the west bank or Gaza strip, and large numbers also went to Syria, Jordan or Lebanon. Many Palestinians did stay and more became part of the Israel population, when the Gaza strip and the west bank were conquered in 1947. The Law of Return; created by Israelis allowed Jews anywhere in the world to live in Israel, but forbid Palestinians to do so. The refugees camp conditions were described as 'atrocious'. Tents were overcrowded, there was no aid quarter, food or sanitation, and diseases spread rapidly. The refugees had three options, to stay in the camps, with no hope of jobs, to join freedom fighter groups- fight as terrorists- 'Palestine Liberation Organization', or emigrate to the Middle East or west and find new jobs but this option only applied to people with money or qualifications. The Palestinian Liberation Organization also known as the PLO took upon two acts of terrorism in the 1970's. The first happened in Jordan and consisted of hijacking 4 British planes and blowing them up. The passengers were let free and the Palestinian hijackers blew up with the planes, it was founded that in the end only 3 planes blew up. This act of terror was done to stun the world and get sympathy from those who had been ignoring them. ...read more.

They want the world to realize that killing is a last resort, and they don't enjoy doing it but it's the only way out. And that is why these interpretations differ. The sources are coming from people with completely different view points, who have been brought up to hate the opposing nation. Both groups of people hold strong, opposite and often fanatical opinions which clash with one another. Both sides feel their views are right and are therefore too stubborn and unwilling to come to an agreement, this comes back to the land issue; they each think it rightfully belongs to them. God promised the land to the Israelis, so is it theirs? To conclude I think that the differing interpretations of the PLO represent this conflict as a whole. They are people who are trying to achieve terror, for the sake of land, merely terrorists in my view. The interpretations also differ due to the Palestinians having a completely opposite opinion to the Israelis. Both opinions are strongly held, but to me the Palestinians lack courage. The reason I think this is because it's not fighting or war which they are taking up but acting selfishly in sudden terrorist ways. I understand completely why the Israelis want revenge and do retaliate. The Palestinians are liars and cheats, saying they don't bomb women and children or civilian places. I know for a fact this is not true they make out they are the innocent ones. This conflict is just a vicious circle, that's why it will never end neither side is willing to give up the land, meaning there is no evidence this will end in the near future. ?? ?? ?? ?? Karlie Whitmore ...read more.