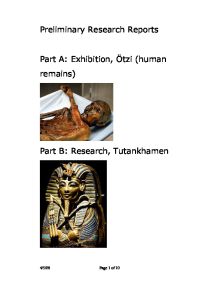 Preliminary Research Reports Part A: Exhibition, �tzi (human remains) Part B: Research, Tutankhamen PART A: �TZI, THE ICE-MAN Background of Discovery Ice-man or �tzi as he is affectionately known was discovered in 1991 by two German hikers in the Alps on the Austro-Italian border. The hikers from Nuremberg were on a mountain trek when they came across what resembled human remains; they took a photograph and alerted the authorities. The police assumed the couple had found a 'glacial corpse', which are common in the area1. The Austrian authorities took charge and freed the body from the ice with a jackhammer (which some think accounts for �tzi's broken ribs and wounds on his side) and scattered and destroyed some of �tzi's possessions2. The body was then rushed to the forensic unit at the University of Innsbruck, Austria. Professor Konrad Spindler took charge of the body and began his research, he determined from an axe found with the body that �tzi was at least 4000 years old3, later forensic examinations, such as radiocarbon dating found �tzi to have lived 5,300 years ago4. It was initially thought �tzi was stuck in a snow storm5 but he was later determined to have died of a lesion to the subclavan artery caused by an arrow wound6. ...read more.

N.B. �tzi's clothes have been recreated, highlighting how harsh alpine conditions must have been. Source 2: T. Hurley, et al, Antiquity 1 Past Perspectives The body of �tzi. The body is missing the epidermis (outer layer of skin) revealing the adipocere (fat converted to wax), which played a significant part in preservation. Source 3: This photo depicts information on the excavation of �tzi and his artefacts. Taken from the Maritime Museum exhibit. Source 4: http://www.bbc.co.uk/science/horizon/2001/icemanmummy.shtml# Professor Berueter testing �tzi's tissue, proving that adipocere played a significant role in �tzi's preservation. PART B: TUTANKHAMEN, THE BOY KING Background of Discovery Tutankhamen's tomb was discovered in the Valley of the Kings in 1922 by Howard Carter. Carter had been assigned as a director of excavations by Lord Carnarvon in 1907 as he was already a well-known excavator11. Despite the wide held belief at the time that the Valley of the Kings no longer contained any undiscovered tombs, Carter was convinced due to numerous monuments with Tutankhamen's name, which were found nearby12. Carter began his campaign for an undiscovered tomb in 1917, he dug near the present site of Tutankhamen's tomb however workers huts blocked him from proceeding. ...read more.

Despite this rather haphazard burial, Tutankhamen's mummy and tomb are excellent windows into the past (albeit only to the upper echelons of ancient Egyptian society). Tutankhamen's body may also provide an invaluable amount of information into the process of mummification and its variations. Today Tutankhamen's mummy is kept in the burial chamber of his tomb20, to further preserve him the tomb is only open at certain times of the year and only being limited to 400 tourists per day. The tomb is closed for the remainder to conserve the current condition of the mummy21. Sources & Supporting Evidence Source 1: http://www.smh.com.au/news/travel/beautiful-tutankhamen-revealed/2007/11/05/1194117906049.html This photo of Tutankhamen's head illustrates the generous use of resin and unguents applied. Remnants of the resin soaked bandages stuffed into the eye sockets can also be seen. Source 2: http://news.bbc.co.uk/1/hi/in_pictures/7078045.stm Tutankhamen's tomb, showing the glass case in which Tutankhamen's mummy is stored, to protect it from further decomposition. Source 3: http://news.bbc.co.uk/1/hi/in_pictures/7078045.stm This photo reveals the extent to which Tutankhamen's body was preserved, shrivelled by natron and dry conditions as well as blackened by resin. Source 4: http://www.ideofact.com/archives/2005_01.html Howard Carter is shown examining Tutankhamen's body through the numerous bandages. Note the delicacy that carter takes (he does not touch the body) in observing the mummy. ...read more.