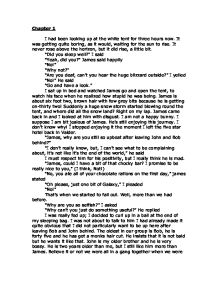 Chapter 1 I had been looking up at the white tent for three hours now. It was getting quite boring, as it would, waiting for the sun to rise. It never rose above the horizon, but it did rise, a little bit. "Did you sleep well?" I said "Yeah, did you?" James said happily "No!" "Why not?" "Are you deaf, can't you hear the huge blizzard outside?" I yelled "No!" He said "Go and have a look." I sat up in bed and watched James go and open the tent, to watch his face when he realized how stupid he was being. James is about six foot two, brown hair with few grey bits because he is getting on-thirty two! Suddenly a huge snow storm started blowing round the tent, and where did all the snow land? Right on my lap. James came back in and I looked at him with disgust. I am not a happy bunny. I suppose I am bit jealous of James. He's still enjoying this journey. I don't know why! I stopped enjoying it the moment I left the five star hotel back in Valder. "James, why are you still so upbeat after leaving John and Bob behind?" "I don't really know, but, I can't see what to be complaining about, it's not like it's the end of the world," he said I must respect him for his positivity, but I really think he is mad. "James, could I have a bit of that chocky bar? I promise to be really nice to you," (I think, Not!) "No, you ate all of your chocolate rations on the first day," james stated "Oh please, just one bit of Galaxy," I pleaded "No!" That's when we started to fall out. Well, more than we had before. "Why are you so selfish?" I asked "Why can't you just do something useful?" ...read more.

What a fun life that must be. "Do you want some food for breakfast?," He asked "No, but I would like some cardboard if it is on the menu, I did not much like the breakfast yesterday," I joked "Oh, shut up," James snapped "Can we try just for one day to not shout at all, for the whole day, not just some of it, ok?," I suggested "Yeah, ok, but I am not promising anything," he grunted I really don't think that we are going to keep this up for very long, considering that he has never not argued with me in his whole life. I remember the first day that we met; we had an argument about whether action man or spider man was better. "What do you mean?," I asked "I mean that if you really start to annoy me I will shout at you," "Ok then, but only with reason," "Can we start tomorrow?," James asked "No, we are going to start today," I suggested. "Ok," He murmured He does not like this idea very much at all. I don't think that he will be able to do it. It is the only thing that is keeping him alive on this trip. "Can we get walking now?," James stood up "Yeah sure," "Grab the bag and I will grab the tent," James instructed "Ok," I smiled We are on the move we have said that it would be easier if we did not talk at all today unless we have to, and it is going quite well. I just pulled a chocolate bar out of my pocket. "Hey is that mine?" "No it is mine," "But you said that you had run out of food. "Yeah, but I did have an emergency bag full of chocolate and dry socks just in case," I lied "You liar," He shouted "No, now let's not get into any arguments about the chocolate," "Calm," "Yes that's right calm," I agreed I think he has anger management problems. ...read more.

"Because we have got to do a lot of measurements and a few tests on site," he answered "Have we got to carry a lot to the helicopter?" "No just sheets of paper and few tubes which are full," "This is very exciting," I said "Well at least you are excited about it," "Aren't you?" "Yes but I am looking forward to seeing my family again," "I am looking forward to that too," "Yeah but I would rather see them than go to the caves," "But that is what we have come all this way for, there is no point in coming if you are not excited about thing that we have come all this way for," "No your right, lets be excited," "I already am," I said Chapter 11 "It's a shame that we did not get to the caves yesterday," I said "Yeah, but today we have got a lot of work to do, so lets get moving," James said "Have you got the pad of paper and the sampling tubes?" "Yes, can we get moving now?," I asked "Yes definitely, let's go and look for that cave man," "No wait...," I shouted "What have you forgotten?," he asked as if I was an idiot. "The food," "Oh, yeah," he said when he realized that he was being stupid. "Where are we going to find this cave man?" "That's the problem," he said "Can't we use some sort of tracking device," I queried "What to pick up the ice around the body," "Obviously not," "We have to look manually," "Does it transmit heat?" "No it is probably dead, after being frozen in a cave for a few million years," "Ok, I was being stupid, can we move on now?" "Let's go," It is quite dark in here but it is really cool, the sun just shines through, so you can see right up into the ice, it is beautiful. ...read more.