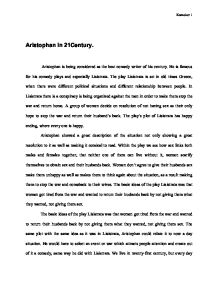 Aristophan in 21Century. Aristophan is being considered as the best comedy writer of his century. He is famous for his comedy plays and especially Lisistrata. The play Lisistrata is set in old times Greece, when there were different political situations and different relationship between people. In Lisistrata there is a conspiracy is being organized against the men in order to make them stop the war and return home. A group of women decide on resolution of not having sex as their only hope to stop the war and return their husband's back. The play's plot of Lisistrata has happy ending, where every one is happy. Aristophan showed a great description of the situation not only showing a great resolution to it as well as making it comical to read. ...read more.

The basic ideas of the play Lisistrata was that women got tired from the war and wanted to return their husbands back by not giving them what they wanted, not giving them sex. The same plot with the same idea as it was in Lisistrata, Aristophan could relate it to now a day situation. He would have to select an event or war which attracts people attention and create out of it a comedy, same way he did with Lisistrata. We live in twenty-first century, but every day political situation becomes more aggressive. Taking as an example the event of September eleventh where the world became mad, panic and fear are in heads of most of the people. Now there is a new war in Afghanistan. ...read more.

Aristophan could base the play on this situation, making the play completely as a confused and comical situation, which at the end would end with happy ending. Of course the setting and the plot will be different from the play of Lisistrata because we are in different century, as well as comical ideas and the language usage would have to be changes so that the listener/reader could understand them. Both plays would have the same motive and idea, at the end being almost equal in the situation but different in time and setting. Because we live now in the 21st Century Aristophan has a great opportunity to make the play more funny and have more scenery in order to get people attention. Also, in our century war considered to be an antihuman event, people might not appreciate the play being funny and would criticize it. Komolov 1 ...read more.