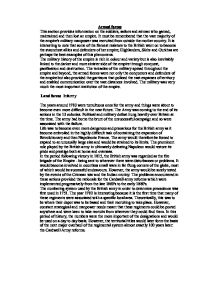 Armed forces This section provides information on the soldiers, sailors and airman who gained, maintained and then lost an empire. It must be remembered that the vast majority of the empire's military manpower was recruited from outside the mother country. It is interesting to note that some of the fiercest resistors to the British went on to become the staunchest allies and defenders of her empire; Highlanders, Sikhs and Gurkhas are perhaps the best examples of this phenomena. The military history of the empire is rich in colour and variety but is also inevitably linked to the darker and more sinister side of the empire through conquest, pacification and destruction. The tentacles of the military spread throughout the empire and beyond, the armed forces were not only the conquerors and defenders of the empire but also provided the garrisons that policed the vast expanses of territory and enabled communication over the vast distances involved. The military was very much the most important institution of the empire. Land forces Infantry The years around 1783 were tumultuous ones for the army and things were about to become even more difficult in the near future. The Army was coming to the end of its actions in the 13 colonies. Political and military defeat hung heavily over Britain at the time. The army had borne the brunt of the unsuccessful campaign and so were associated with the failure. Life was to become even more dangerous and precarious for the British army as it become embroiled in the highly difficult task of containing the expansion of Revolutionary and then Napoleonic France. The army would therefore be forced to expand to an unusually large size and would be strained to its limits. The prominent role played by the British army in ultimately defeating Napoleon would restore its pride and prestige both at home and overseas. In the period following victory in 1815, the British army was regarded as the fire brigade of the Empire - being sent to wherever there were disturbances or problems. ...read more.

Cables Being Laid in Canada The value of Britain's world wide telegraphic system actually contributed to Britain's strategic worries. The cables were kept in British colonies or under British controlled seas as much as possible, but this was not always avoidable. Whenever this occurred the British worried about interceptions of messages or of cutting the link altogether. For example, the link to Australia passed over Dutch Java, the South American cable ran through Portugese Madeira, but probably the biggest headache of all to Britain's strategic thinkers was the cable that ran from London to Calcutta. In fact, there were three such cables. One ran from Lowestoft to Germany, through Russia, Persia and in to India. Apart from the strategic nightmares of this essential line of communication was the fact that the Germans and Russians were in a position to keep the costs of using this cable artificially high. The second cable was not much better. It ran across Europe to Constantinople, across Turkey to the Persian Gulf and then by cable to Karachi. Little reliance could be placed on the Ottoman empire. The third cable ran from London to Gibraltar to Malta, Egypt to Aden and then on to Bombay. This looked secure enough, but still relied on using Spanish relay stations to boost the signals. Besides, it was generally more economic to send the messages up over France from Malta. To add to the strategic difficulties the vagaries of the currents and weather caused yet further headaches. Storms, winds, silt, even fishermen could all accidentally disrupt the sending of messages. Combined with the distances involved, it is little wonder the tariffs could be so high. 4 shillings per word to India, and 6s. 9d. to Australia. And yet, the British were convinced that the value of the system was worth the price. All over the world, Englishmen were employed laying or maintaining cables or operating booster stations along the line. ...read more.