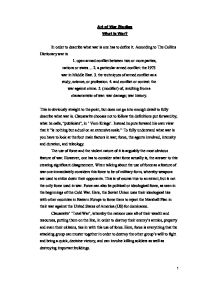 Art of War Studies What is War? In order to describe what war is one has to define it. According to The Collins Dictionary war is 1. open armed conflict between two or more parties, nations or states... 2. a particular armed conflict: the 1973 war in Middle East. 3. the techniques of armed conflict as a study, science, or profession. 4. and conflict or contest: the war against crime. 5. (modifier) of, resulting from a characteristic of war: war damage; war history. This is obviously straight to the point, but does not go into enough detail to fully describe what war is. Clausewitz chooses not to follow the definitions put forward by, what he calls, "publicists", in ' Vom Kriege'. Instead he puts forward his own view that it "is nothing but a duel on an extensive scale." To fully understand what war is you have to look at the four main factors in war; force, the agents involved, intensity and duration, and teleology. The use of force and the violent nature of it is arguably the most obvious feature of war. However, one has to consider what force actually is, the answer to this creating significant disagreement. When talking about the use of force as a feature of war one immediately considers this force to be of military form, whereby weapons are used to strike down their opponents. ...read more.

If force is indeed the use of weapons, then one has to consider what sort of weapons are used in war. Weapons have changed through time, becoming increasingly high-tech to the point of nuclear weapons that could remove all humans off the face of the earth, but they have not been used to their full extent as of yet. The larger powers tend to use weapons such as aircrafts with bombing and firing capabilities, tanks and battleships, whilst the soldiers involved will carry such things as guns and grenades. Martin van Creveld puts forward his thesis that in future wars weapons will become less sophisticated due to the types of groups involved. With this, he believes the production of high-tech weapons will stop and cheaper, but still effective weapons, will be used. This is already happening in the war between Al-Qaeda and the West, where they are trying to bring down the US and the whole western system. They did not kill people with high-tech weapons in their most devastating strike against the US, which killed thousands of people, but took over two aeroplanes around New York and flew them into two buildings, which were among the most important in the West, showing it does not have to be all guns and bombs in wars. Another important part of war is the agents involved in it. ...read more.

War is number of these skirmishes and would ultimately be more than two. The intensity is another matter, and this varies from war to war depending on the strength, nature and will to destroy of the groups involved. Wars do not necessarily have to be high intensity, although Clausewitz' 'Total War' would be, where as Van Creveld's 'Low Intensity Conflict' would not. War would not happen if it was not fought for a certain reason, for that fact one has to understand what means war is fought for. This can be seen in Clausewitz' definition that "war is the continuation of politics by other means". War is not always going to be fought for political reasons and can in fact be due to such things as ideological and economic factors. In conclusion one can see that the definition of war in a dictionary is not explicit enough. Saying war is an "open armed conflict between two or more parties, nations or states" is much too thin an answer to discuss what war is in who is involved. Discussing fully the four factors in the introduction brings about a clear definition of war, which cannot really be put into a few sentences as it varies a great degree and is ever changing through time, whether it be who is involved, the weapons used or the means of which it is fought for. ...read more.