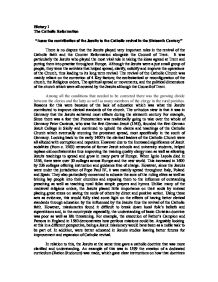 History 1 The Catholic Reformation "Asses the contribution of the Jesuits to the Catholic revival in the Sixteenth Century" There is no dispute that the Jesuits played very important roles in the revival of the Catholic faith and the Counter Reformation alongside the Council of Trent. It was particularly the Jesuits who played the most vital role in taking the ideas agreed at Trent and putting them into practise throughout Europe. Although the Jesuits were a just small group of people, they were the activists that helped spread, clarify, solidify and improve the operations of the Church, thus leading to its long term revival. The revival of the Catholic Church was mainly reliant on the correction of 4 Key factors; the ecclesiastical or reconfiguration of the church, the Religious orders, The spiritual spread or movements, and the political dimensions of the church which were all covered by the Jesuits although the Council of Trent. Among all the conditions that needed to be corrected there was the growing divide between the clerics and the laity as well as many members of the clergy in the rural parishes. ...read more.

In addition, Jesuits increasingly the key writers of the period to gave clearer descriptions of theology, therefore making it easier to push through Catholic teachings. For Instance Robert Bellermine wrote what collectively become called "The Disputationes" which set out to reinforce Catholic doctrine and undermine Protestant theology which published between 1581 and 1593. Just as the Council of Trent was to lay down a clear definition of Roman Catholic beliefs, the Jesuits but also for those who might wish to become part of the spiritual revival of Roman Catholicism. Pope Paul IV promulgated the "Index Librorum Prohibitorum" which was a list of banned books reinforced by the Jesuits during the Council of Trent in 1559. In comparing the position of Catholicism in the 1400's, which would be its lowest point, was less productive in reimbursing the catholic faith. A series of corruption, nepotism and buying of high status position of secular clergy men during this period reveals that without a clear group of individuals such as the Jesuits who lead and lived their lives according to the doctrine then the people would not have anyone teaching them the true ways to live the Catholic faith. ...read more.

relationship between Canisuis and Emperor Ferdinand) but faced some difficulties with Philip II and had been expelled from France in 1595 however, restored in 1603. In England particularly, they earned real hatred when they tried to overthrow Elizabeth out of her thrown and place Mary Staurt instead. This also shows how far the Jesuits were ruthless in their missions therefore gaining an increased respect whatever the cost. The Jesuits were a sophisticated international organization, which ignored office and statuses and temptations of the flesh, but were fully prepared to be involved in politics if it would help them to achieve their ends. In conclusion, the Jesuits were a major factor in the revival of the Catholicism. Although the importance of the Jesuits in the Catholic and Counter Reformations cannot be over emphasised; it is important to remember that they were the educators of the aristocracy and the confessors of the princes. And that their missionary work stretched throughout Europe and their loyalty to the Papacy placed their support firmly behind the reforming Papal leadership of the Council of Trent thus to reach the eventual recovery and improvement of the Catholic Faith, most importantly the Jesuits contributions helped develop Christianity throughout subsequent centuries. ?? ?? ?? ?? ...read more.