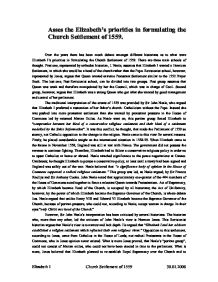 Asses the Elizabeth's priorities in formulating the Church Settlement of 1559

Asses the Elizabeth's priorities in formulating the Church Settlement of 1559. Over the years there has been much debate amongst different historians as to what were Elizabeth I's priorities in formulating the Church Settlement of 1559. There are three main schools of thought. First one, represented by orthodox historian, J. Neale, assumes that Elizabeth I wanted a Henrican Settlement, in which she would be a head of the church rather than the Pope. Revisionist school, however, represented by Jones, argues that Queen wanted extreme Protestant Settlement similar to the 1552 Prayer Book. The last one, Post-Revisionist school, can be divided into two groups. First group assumes that Queen was weak and therefore manipulated by her the Council, which was in charge of Cecil. Second group, however, argues that Elizabeth was a strong Queen who got what she wanted by good management and control of her parliament. The traditional interpretation of the events of 1559 was provided by Sir John Neale, who argued that Elizabeth I preferred a restoration of her father's church- Catholicism without the Pope. ...read more.

In their eyes "only Christ was head of the Church." However, Sir John Neale's interpretation has been criticised by several historians. The historian who, more than any other, led the criticism of John Neale's view is Norman Jones. This Revisionist historian argues that Neale's view is to narrow and lack depth. He argued that "Elizabeth I and her advisers established a religion settlement which reflected their own religious views." Opposition to this settlement, according to Jones, came from Catholics in the House of Lords, not radical Protestants in the House of Commons, who in Jones opinion never existed. What is more Jones proved, that Neale's "puritan group", could not consist of Marian exiles, who could not have been elected in time to the parliament. What is more, Jones believed that Elizabeth planned to re-establish Royal Supremacy over the Church and to reintroduce the Book of Common Prayer of 1552. "The main opposition of these proposals came from Catholics Bishops in the House of Lords." As Jones noted in his essay "Elizabeth's First Year" in Christopher Heigh's "The Reign of Elizabeth I" "By the 23rd March the Queen and Cecil, having badly miscalculated the strength of resistance to religious change in the Lords, found themselves in a difficult position". ...read more.

As she goes on, "Elizabeth used her opposition wisely to achieve her objectives." Susan and Guy agree on the causes which affected the result of the Settlement of 1559. They believe that "Via Media" was chosen by the king because of Catholic pressure, however Guy argues that it was because Queen was weak and influenced by her Council, whereas Doran believes that Queen decided to choose "Middle Way" on her own because it was the best solution not only for her, but also for the state. It is clear that the most important single factor in explaining the settlement is the Queen herself. It was Protestant settlement rather than a Catholic one reflected her religious views as well as those of her most loyal supporters. What is important to mention, is that Elizabeth consistently used the Church with political concerns uppermost in her mind. One can argue that Elizabeth was forced by Catholics and Puritans to choose the "via media" option. This, however, can be argued by more likely theory that she simply reviewed her priorities in forming the Religious Settlement of 1559 and chose the middle way to maintain the peace within the state. ?? ?? ?? ?? Elizabeth I Church Settlement of 1559 30.01.2006 ...read more.