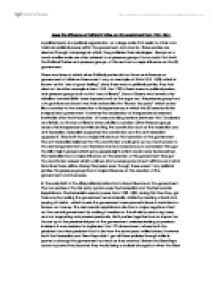 Asses the influence of Political Parties on US government from 1763-1861. A political party is a political organisation on a large scale that seeks to attain and maintain political power within the government and country. These parties are elected through campaigns in which they publicise their ideologies. Groups on a much smaller scale are often referred to as pressure groups. It is no doubt that both the Political Parties and pressure groups, of this era had a major influence on the US government. There was times at which when Political parties did not have an influence on government at all since there wasn't any, an example of this is 1815-1828, which is known as the "era of good feeling", since there was no political parties, they had died out. Another example is from 1763- the 1790's there were no political parties, only pressure groups such as the "sons of liberty". Sons of Liberty was formed after rebellion towards British taxes imposed such as the sugar act, this pressure group had a huge influence since it was their actions like the ...read more.

The democratic republicans also had a major negative affect on the central government by making it weaker on the whole by reducing taxes and not supporting acts passed previously. Both parties together had an impact on the set up of the presidential part of the government, ministers looking at previous incidents it was decided to implement the 12th Amendment, where both the president and vice president had to be from the same party unlike before. However both the Federalists and Dem Reps didn't get all there policies through while in power to change the government as much as they wanted. Before the Dem Reps came to power they boasted they would bring a radical change but when the Dem reps finally came to power with Jefferson in 1801 he kept most of the previous ministers which were chosen by federalists. One of the main policies of the Dem reps was "anti national bank", even when Jefferson was in power he was unable to close the bank down. ...read more.

Similarly the republicans had a drastic influence on the government by openly tackling the issue of slavery, as a result of this the government changed from being full of representatives from both parties to being full of just republicans after the south had seceded. On the whole I believe that political parties were influential during the period 1763-1861. However there can be looked upon as individual parties not having an influence on government at all like the Whighs in contrast to the Democrats which had a large influence on the government. But even if the party itself did not have an influence on government it did affect the party system for example which were un influential while in office but they helped to alter the party system. So on the whole political parties did have an influence even though it might not have been while they were in power but each party contributed to a change. ?? ?? ?? ?? ...read more.