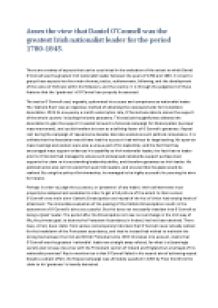 Asses the view that Daniel OConnell was the greatest Irish nationalist leader for the period 1780-1845.

﻿Asses the view that Daniel O?Connell was the greatest Irish nationalist leader for the period 1780-1845. There are a variety of aspects that can be scrutinised in the evaluation of the extent to which Daniel O?Connell was the greatest Irish nationalist leader between the years of 1780 and 1845. It is best to group these aspects into four main themes; tactics, achievements, following, and the development of the sense of Irishness within his followers, and the country. It is through the judgement of these features that the ?greatness? of O?Connell can properly be assessed. The tactics O?Connell used, arguably, epitomised his success and competence as nationalist leader. The ?Catholic Rent? was an ingenious method of obtaining the necessary funds for his Catholic Association. With its one-penny a month subscription rate, O?Connell was able to amass the support of the whole country- including the lowly peasantry. This tactical thoughtfulness allowed the Association to gain the support it needed to launch a full-scale campaign for Emancipation (a proper mass-movement), and could therefore be seen as a defining factor of O?Connell?s greatness. ...read more.

There have, in fact, been claims from various contemporary historians that O?Connell never actually wished for the breakdown of the Protestant ascendancy, and that he instead had wished to maintain the strong ties between the Irish and British Protestant elite. With this taken into account, claims that O?Connell was the greatest ?nationalist? leader are straight away refuted, for what is a (seemingly secret) plan to keep close ties with the Protestant section of Ireland and England but a betrayal of his nationalist promises? Key to mention too is that O?Connell failed in his second aim of achieving repeal. Despite a valiant effort, the Repeal campaign was ultimately quashed in 1843 by Peel, therefore the claim to his ?greatness? is heavily detracted. O?Connell would indeed have been very little without the following he enjoyed. His political tact in drawing support has already been mentioned, but the way in which he managed his support is telling in his claim to greatness. ...read more.

However in response to the question- whether O?Connell had been the greatest Irish nationalist leader during the time period- O?Connell?s methods and achievements make him the most effective, successful, and thus ?greatest? nationalist leader compared to any other nationalist figures in Ireland. Key to remember however, is that his ?greatness? can also be viewed as somewhat inconsistent, or limited: despite the passing of Emancipation, very little changed in the political and social structure of Ireland, and the speculation of his attempts to uphold ties with the Anglo-Irish Protestant Ascendancy only adds to the clouds of the uncertainty about O?Connell?s true aims. However, judging by the fact that he managed to perform an electoral miracle by defying landlords and succeeding in the County Clare election, he did something extremely unique: he managed to mobilise the mass support of the majority of Ireland, and successfully projected his views in a way that represented most of the population. His propagation of nationalistic views was successful in gaining followers and achieving his aims, therefore in essence O?Connell had been Ireland?s greatest nationalist leader during this 65 year period. Thomas Smith ...read more.