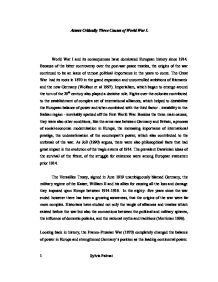 Assess Critically Three Causes of World War I. World War I and its consequences have dominated European history since 1914. Because of the bitter controversy over the post-war peace treaties, the origins of the war continued to be an issue of utmost political importance in the years to come. The Great War had its roots in 1870 in the grand expansion and uncontrolled ambitions of Bismarck and the new Germany (Wolfson et al 1997). Imperialism, which began to emerge around the turn of the 20th century also played a decisive role. Fights over the colonies contributed to the establishment of complex set of international alliances, which helped to destabilize the European balance of power and when combined with the third factor - instability in the Balkan region - inevitably sparked off the First World War. Besides the three main causes, they were also other conditions, like the arms race between Germany and Britain, a process of social-economic modernization in Europe, the increasing importance of international prestige, the underestimation of the counterpart's power, which also contributed to the outbreak of the war. As Joll (1990) ...read more.

Germany, which had been united as recently as 1871, and within one generation had become an awesome industrial and military power, posed real danger to the British pre-eminence and mastery in Europe. However the most dangerous acceleration came in the field of naval expansion. Since Britain held her navy to be vital, any attempt to rival it by another power, particularly Germany would meet a spirited response (Wolfson et al 1997 ). Britain also feared that Germany and Russia might make common cause, for instance in the Middle East (Stone 1973). However there were many other signs that the alliance system was overheating in the years before 1914. Morocco - rich in mineral and agricultural wealth - on the northern coast of Africa had become a central feature of the world politics because it combined a variety of aims and interest (Wolfson et al 1997). It provided an opportunity for colonial expansion, and also to enhance European aims in relative safety. By 1900 several European countries were eager to exploit the resources of Morocco, particularly Germany and France coveted the place. In 1904, in the 'Entente Cordial' Britain had recognised French interest over the country. ...read more.

Imperialism, the system of international alliances, and the rising nationalism. However, the ambitions and strategies of the Great Powers, colonial rivalry, awakening national pride were also decisive factors. Imperialism fuelled conflicts among the Great Powers, particularly when it threatened the participants' pride, and interest. But it also led to the frustrations of ethnic minorities, which in turn sparkled violent reactions. The Morocco crisis increased the sense of international insecurity and intensified the pressure on states to rearm. The Balkan Wars strengthened the position of the Balkan powers, which challenged the plans of Russia and Austria-Hungary for domination. Each of these clashes had the potential to ignite a European war and while none solely contributed to the outbreak of war, they certainly assisted in the creation of a complex series of international alliances geared towards mutual protection against mutual enemies. B I B L I O G R A P H Y Eksteins, M. 1989. Rites of Spring. The Great War and the Birth of the Modern Age. London: Bantam Press. Joll, J. 1990. Europe since 1870. London: Penguin. Gildea, R. 1996. Barricades and Borders. Oxford: Oxford University Press. Merriman, J. 1996. The History of Europe Vol 2. London: Norton. Stone, N. 1973. Europe Transformed 1878-1919. London: Fontana. Wolfson, R. Laver, J. 1997. Years of Change. Europe 1890-1945. London: Hodder and Stoughton. 1 Sylvia Palmai ...read more.