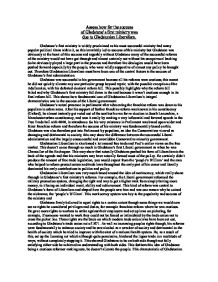 Assess how far the success of Gladstones first ministry was due to Gladstonian Liberalism.

Assess how far the success of Gladstone's first ministry was due to Gladstonian Liberalism. Gladstone's first ministry is widely proclaimed as his most successful ministry had many popular political titans within it, so this invariably led to success of this ministry but Gladstone was obviously at the heart of this success and arguably without Gladstone many of the successful reforms of the ministry would not have got through and almost certainly not without his unequivocal backing. So he obviously played a large part in the process and therefore his ideologies would have been pushed forward especially by the people, who were wildly supportive of almost any policy he brought out. Therefore Gladstonian Liberalism must have been one of the central factors in the success of Gladstone's first administration. Gladstone was successful in his government because all his reforms were cautious; this meant he did not quickly alienate any one particular group beyond repair, with the possible exception of the Adullamites, with his defeated electoral reform bill. This possibly highlights why the reform bill failed and why Gladstone's first ministry fell down in the end because it wasn't cautious enough in its final reform bill. ...read more.

This doesn't come through so much in Gladstone's first Liberal government as when he was Chancellor of the Exchequer. This may show that actually Gladstone pushed his form of Liberalism to the back of the agenda and that his ministers may have actually formed most of the policy. He certainly didn't produce the amount of free trade legislation, you would expect from the 'people's William' and the man who helped to reform protectionism and trade laws throughout the early part of his career and literally dominated his early contributions to politics and policy. Gladstonian Liberalism was very much based around the idea of meritocracy, which really shone through in Gladstone's first ministry's reforms. For example, the Liberal government reformed the military promotion system, changing the right and way to get a higher rank from simply having more money, to it being on individual merit, ability and achievement. This kind of reform was central to Gladstone's form of Liberalism and shaped how the people saw him and was one reason why he coined the nickname, the 'people's William'. ...read more.

The student has a good understanding of the different interpretations of the success of Gladstone's ministry, which is good because it shows the examiner that they are thinking widely enough to consider more than one explanation for a single event. ...

The student has a good understanding of the different interpretations of the success of Gladstone's ministry, which is good because it shows the examiner that they are thinking widely enough to consider more than one explanation for a single event. The student is good at not straying away from the focus of the question, which is good because it shows they have enough relevant knowledge and understanding to write a full essay.

The student uses good evidence at most points, such as the section on military promotion, which is good as it shows that the student not only understands the interpretation, but can prove it with evidence. The use of dates is good - this shows the examiner the student can remember not only general information that most candidates will use, but also precise information, and this student takes it a step further by linking it to a wider context - "These rights are the basis on which modern trade union laws have been set out" - which shows they can apply their understanding of historical processes to more than one time period. (The student does this without going too far from the focus of the question.) You always need to be careful that the evidence you are using is definitely factual - this student refers to Gladstone's introduction of a "national health system", which was in fact not started until 1948. This student probably made this mistake by mixing it up with something else - when revising, always re-write the name of the person or institution you are learning at least once so that you are clear about what you know.

The conclusion lets the essay down because it refers to "other big figures in his Cabinet" as a reason for success, but there is no mention of any other member of the Cabinet anywhere in the essay, suggesting the student cannot plan and organise information. A way round this when you get to the conclusion would be to write a quick list of one argument you have made or piece of evidence you have used from each paragraph in the essay, and then try and make you sure you refer to some of the list in the conclusion - this shows the examiner you fully understand your line of argument and can summarise what you have written.

Apart from occasional apostrophe mistakes, the grammar, spelling and punctuation are good. At some points, the essay uses the first person - "I", "we". This is not a really bad thing but "it could be argued" sounds more impressive than "I would argue" because you are referring more explicitly to the line of argument (showing you are focused) rather than yourself. The essay would also benefit from heavier use of technical terms such as "consequence" and "cause", as these would leave the examiner in no doubt that the student understands how historical events occur and are linked.