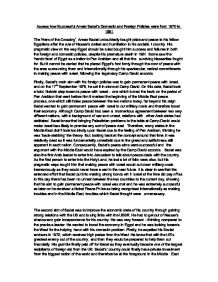 The ‘Hero of the Crossing’, Anwar Sadat undoubtedly bought pride and peace to his fellow Egyptians after the rule of Nasser’s defeat and humiliation to his socialist country. His pragmatic view on the way Egypt should be ruled bought him success and failures in both the foreign and domestic policies, despite his premature death in 1981. Some saw the ‘heroic face’ of Egypt as a traitor to Pan Arabism and all that the surviving Nasserites fought for. But it cannot be denied that he placed Egypt’s foot firmly through the door of peace with the area surrounding them and internationally through his spectacular, radical commitments to making peace with Israel, following the legendary Camp David accords.

Firstly, Sadat’s main aim with his foreign policies was to gain permanent peace with Israel, and on the 17th September 1978, he set it in stone at Camp David. On this date, Sadat took a bold, historic step towards peace with Israel – one which turned the back on the period of Pan Arabism that went before him it marked the beginning of the Middle East peace process, one which still holes peace between the two nations today, far beyond his reign. Sadat wanted to gain permanent peace with Israel to cut military costs and therefore boost their economy. Although Camp David had seen a momentous agreement between two very different nations, with a background of war and unrest, relations with other Arab states had detiriated. Sadat knew that bringing Palestinian problems to the table at Camp David would make Israel less likely to promise any sort of peace deal. Therefore, many states in the Middle East didn’t look too kindly upon Sadat due to the feeling of Pan Arabism, thinking he was ‘back-stabbing’ the theory. But, looking back at the concept around that time, it was relatively dead as it was fundamentally unrealistic due to the greed and selfishness still apparent in each nation. Consequently, Sadat’s peace aims were successful and the argument with the Middle East would have expired by the Camp David accords. Sadat was also the first Arab leader to enter into Jerusalem to talk about peace deals with the country. As the first person to enter into the Holy Land, he lost a lot of followers also, but his pragmatic ways taught him that making peace with Israel would cut down military costs tremendously as they would never have a war in the near future. It is clear to see that the extended effort that Sadat put into making strong bonds with Israel at the time did pay off as to this day there has been no unrest between the two countries to the current day, showing that his aim to gain permanent peace with Israel was met and he was extremely successful as later on he received a Nobel Peace Prize as being recognised internationally as making troubles end in the Middle East, troubles which Sadat thought were unnecessary.

The second aim of Sadat was to improve the economic state of his country through gaining strong relations with the US and losing links with the USSR. He had to get out of Nasser’s shadow and gain independence for his country. He was very forward- thinking compared to the previous leader. He wanted to boost the economy in Egypt and he was looking towards the West for the helping hand with his domestic problem. Firstly, he expelled his Soviet advisors in 1972, which received high praise from the West. He knew that with the US’s greatest enemy out of the country, and then they would be prepared to help them out financially. His gamble finally paid off for Sadat as they eventually became one of the largest recipitants of foreign aid from the US. Sadat’s’ country could finally have private investment from the biggest nation of the world and therefore be at the foreground in the Middle East that no other country would wish to fight as they had such strong help. These investments also led to greater links with Israel as the US were both their allies now and therefore there would be no need to go to war and spend surplus amounts of their money on the military.

Sadat’s domestic policy for the economy also introduced large changes to the country as he tried to step out of Nasser’s shadow once again. Sadat’s mind-set was completely different to that of Nasser, as he strived for private foreign investment and controlling inflation through fixing prices. This meant that Sadat could be sure there would be no higher wage demands and that the economy was more predictable, liberalising Egypt’s economy for the better, or so he thought. In the last years of his reign, there were a series of ‘Bread Riots’ protesting against his economic liberalisation, through the public out roar to Sadat’s lifting of prices led to his government having to take control of the prices – reversing themselves. Sadat’s economic domestic policy was very unpopular with the majority of the public – especially the Nasserites. Although there was a lot of public unrest at the time, the rich Egyptians were in favour as they were benefitting from his rule. They lapped up the foreign investment as the lack of control on basics such as bread did not affect them as much. US investment as well made lives for the rich under Sadat’s rule very good, but there was left beneath them a very widening gap between them and the poor.

It cannot be disagreed that Sadat was not a large change in the regular leadership style of the Arab states in the Middle East. The greed, Pan Arabism and selfishness were not apparent in the leader as he strived for peace with Israel and other countries, boosting the economy and making greater links with the western world – all things which were unheard of in the Middle East at the time. Many people did not follow his new way of thinking, the pragmatic style did not agree with them, or was it that perhaps they were not ready for him? And that Nasser had such a large influence on the country that they were indoctrinated in a singular way of thinking, with no room left for different out looks on leadership. Evidence suggests that Sadat was not a failure, he just followed someone with such a great sway on the country that he could not lead without riots and rebellions as they did not want change. The ‘Hero of the Crossing’ was a great leader with the interests of Egypt at heart, and if only his life wasn’t cut tragically short, there could have been plenty more he could have done for the area as a whole.