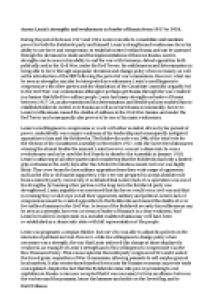 Assess Lenins strengths and weaknesses as leader of Russia from 1917 to 1924.

﻿Assess Lenin?s strengths and weaknesses as leader of Russia from 1917 to 1924. During the period between 1917 and 1924, Lenin was able to consolidate and maintain power for both the Bolshevik party and himself. Lenin?s strengths and weaknesses lie in his ability to use force and compromise, to establish control within Russia and can be assessed through the decisions he made and the implementations of them on Russia. Lenin?s strengths can be seen in his ability to end the war with Germany; defeat opposition both politically and in the Civil War, under the Red Terror; his ruthlessness and determination in being able to force through unpopular decisions and change policy when necessary, as well as the introduction of the NEP following the period of war communism. However, what can be seen as strengths can also be interpreted as weaknesses; Lenin?s unwillingness to compromise with other parties and the dissolution of the Constitute Assembly arguably led to the Civil War; war communism although it perhaps got Russia through the war, resulted in a famine that killed five million people. Lenin had many strengths as leader of Russia between 1917-24, as aforementioned his determination and flexible policies enabled him to establish Bolshevik control over Russia as well as secure Russia economically, however, Lenin?s ruthlessness caused ...read more.

However, while his willingness to change policy when necessary was a strength, the way that Lenin enforced this change at times displayed a weakness. An example of Lenin?s strength and of his willingness to compromise was the New Economic Policy. This was accepted at the tenth party congress in1921 and it ended the forced grain requisition of War Communism, allowing peasants to sell surplus grain at local markets. It also reintroduced market forces into the Russian economy as private trade was legalised, despite the fact that the Bolsheviks came into power promising to end capitalism in Russia. Lenin now accepted that it was necessary to form an alliance between the workers and the peasants, hence the hammer and sickle on the Soviet flag, and to introduce a new stage into the transition to socialism. Although he was forced into this change, due to the devastating famine in the Volga region and the revolts in Tambov and Kronstadt, NEP was a victory for Lenin?s pragmatism, showing that he knew when to change things. This pragmatism did not replace Lenin?s overall ideological aims though, and he was still determined to build socialism. But he accepted that ?only an agreement with the peasantry can save the Socialist revolution in Russia until the revolution has occurred in other countries.? ...read more.

It also led to a reliance on extreme violence and dictatorial methods, instead of democratic debate, to solve difficult problems; policies which began during the Civil War and which continued to be used afterwards by means of the Cheka. Despite the fact that he sometimes knew when to compromise, Lenin?s heavy-handed, oppressive measures greatly undermined his overall aim; the construction of socialism in Russia. When assessing Lenin?s strength one can take the perspective of the Bolshevik party; whereby Lenin?s ruthlessness and lack of compromise successful strengthened and consolidated their one-party rule over Russia by the end of 1924, or the perspective of Lenin as leader of Russia as a whole; whereby Lenin?s undemocratic ideology denied the country a representative form of government and ultimately cost the lives of millions in the Civil War, Red Terror and widespread famine caused by war communism. To conclude, Lenin?s strengths can ultimately be seen as his weaknesses; his inability to compromise led him to dissolve the constitute assembly, and consequently Lenin secured Bolshevik party but arguably triggered the start of the Civil war and so can be seen as a major weakness. Lenin?s self-confidence meant opposition to the Bolsheviks was destroyed however; it led to a reign of terror and the deaths of millions. His one major strength was his pragmatism, in being willing to forfeit his own ideologies in order to maintain power. Matt Williams ...read more.