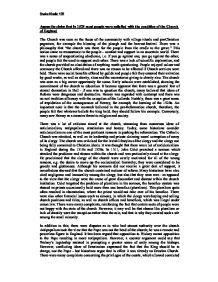 Assess the claim that in 1529 most people were satisfied with the condition of the Church of England The Church was seen as the focus of the community with village rituals and pre-Christian paganism, for example the blessing of the plough and the harvest festival. There was a philosophy that "the church was there for the people from the cradle to the grave." This notion came as reassurance to the people - comfort and support in an uncertain world. There was a sense of unquestioning obedience, i.e. if you go against one, you go against the other, and people felt the need to support each other. There was a lack of scientific explanation, and the church provided an elucidation of anything worth questioning. People enjoyed colour and ceremony the Church offered and there was no reason to be affected if Church services were held. There were social benefits offered by guilds and people felt they ensured their salvation by good works, as well as charity, alms and the monasteries giving to charity also. The church was seen as a big career opportunity for some. Early schools were established, showing the commitment of the church to education. It became apparent that there was a general fear of eternal damnation in Hell - if one was to question the church; many believed that ideas of Reform were dangerous and destructive. Heresy was regarded with contempt and there was no real tradition of heresy with the exception of the Lollards. ...read more.

However, it may well be that abuses like pluralism or lack of chastity were the exception rather than the rule, and that is why they created such a stir among the small minority. In addition to this, there were disputes as to who had utmost authority over the church. Antipapalism took the view that the Pope was not the head of the church; he was a remote and powerless figure in England. It has been argued that opposition to Wolsey meant opposition to the Pope resulting in more antipapalism. However, a counter argument could say that Wolsey's legateship assisted in prompting a greater sense of unity among the bishops. However, conflicting ideas of Erastianism expressed the fact that the King should be in charge, not the Pope - but historians argue that in effect it was already an Erastian Church. There were many complaints concerning the privileges of the courts, which allowed convicted men who claimed to be in holy orders, to be tried in a Church court where penalties were lighter. Heresy was a fundamental factor that indicated that people were not so satisfied with the condition of the church; it saw men and women challenge the doctrines of the Church. The Lollards were an underground sect that despite not having masses of support, they brought to light the problems of the vernacular Bible. John Wycliffe challenged the idea of transubstantiation as well. ...read more.

The clergy kept mistresses, even though they were supposed to be celibate; they took bribes and neglected their work. However, the abuses of the church were by no means the only cause of the coming split. Corruption had always existed. But the Church's failures and refusal to reform it made it very insecure in the changing world of the sixteenth century. People were beginning to ask questions. By the 1520s, protests against the prevailing method of worship could be heard throughout the country. Whilst England's king remained a Catholic Prince, the Protestant doctrines being conversed about in Europe were only a remote threat to the church. The Elton-Dickens view suggests that the church was corrupt. Conversely, The Haigh-Scarisbrick view implies that the people were satisfied with the condition of the Church. Further evidence supports the idea that England had a thriving Catholic community: the church enjoyed Chantries, fraternities and religious guilds - signifying that many families invested in the church. Scarisbrick found that over 95% of the pre-Reformation wills contained some form of religious inquest. In conclusion, it is fair to say that many historians concentrated on the opposition to the Catholic Church and the troubles that it had - some even exaggerated the scale of the problems. With this they ignored the positive qualities of the Church. Through studying the positives and negatives, it is reasonable to say that the Church of England was generally unchallenged before the break from Rome, and people were generally satisfied with it's condition in 1529. Sneha Khetia 12R ...read more.