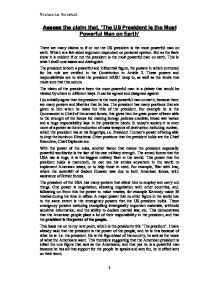 Assess the claim that, 'The US President is the Most Powerful Man on Earth'.

This links me to the next point of worldwide influence. Most of the world knows of the USA, and it is evident the influence that certain places have had, i.e. Iraq. This influence is only known of and taken notice of because of the power that the president has. Those people know that if they do not take notice of the president and the USA that circumstances will be inevitable. I.e. after 9/11 Bin Laden and his people knew that the USA would claim revenge, and so to the power that president held made it possible to try find and bring down Bin Laden. Many states of America have different bodies; federal heads etc, but not many of those that live in them know the politicians that control them. All American citizens know who their president is, is the most known politician of America, and even though he's not the party head-he is seen as a 'chairman' by the people. Again this is a figurehead to all people. It could however be argued that the president is not infact the most powerful man on the earth for many reasons. One argument against is the fact that everything the president does is not just done by him. ...read more.

and dominant role, yet one point is that, the president has an immense support from his country, through the military and strong economic background. Yet other key figures of the world could be just as powerful but in the proportion to their country and then the world. For example the power of Bin Laden and Sadam Hussain is a dictatorship type, and they have the power but on a smaller scale than the president. The US president has an immense power over the USA's nation and also what he can do outside the USA, as well as a great influence in one way or another. In order to understand if the president is infact the most powerful man on the earth, he must be compared to other key figures. Ensuring that all others are considered. The US president has both a political and financial strength, with the aid of a well-built military. This gives him immense power and so of the US president is not all his and he cant just do what he wishes, it needs ratification from other officials. Therefore although one man, in one large country can influence one world, it takes more than one powerful man to make the earth and its people what it is. Victoria Bristol 1 ...read more.