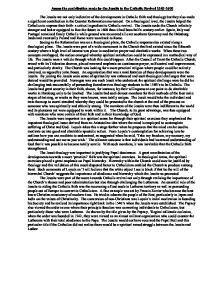 Assess the contribution made by the Jesuits to the Catholic Revival 1545-1600 The Jesuits are not only indicative of the developments in Catholic faith and theology but they also made a significant contribution in the Counter Reformation movement. On a theological level, the Jesuits helped the Catholics to express their faith- a critical ingredient to Catholic revival. The Jesuits made the Church infinitely stronger and better equipped to face the future in 1600 than it had been half a century earlier. Spain, Italy and Portugal remained firmly Catholic while ground was recovered all over southern Germany and the Habsburg lands and eventually Poland and Rome were won back to Rome. Seeing as the Reformation was on a theological plane, the Catholic response also existed along a theological plane. The Jesuits were part of a wide movement in the Church that had existed since the fifteenth century where a high level of interest was place in meditative prayer and charitable works. ...read more.

The Jesuit would take the individual and train them up to moral standard whereby they could be presented to the church at the end of the process as someone who was spiritually and ethically strong. The members of the Jesuits were thus indifferent to the world and its pleasures yet were equipped to work within it. The Church, to its great advantage, was thus equipped with members who were certain of their faith and in their knowledge of God. The Jesuits were important in a spiritual sense for through their spiritual exercises they emphasised the important theological issue derived from an Aristotelian idea where the mind is employed to contemplate suffering of Christ and God. Loyola takes this a stage further when he proposes that the mind can be used to motivate us into good and charitable apostolic action. From Loyola's contemplation for achieving love he outlines how you can meditate to understand, as suggested when he said, 'Take my freedom, my memory, my understanding and use me as you wish.' ...read more.

An essential role of the Jesuits to aiding the Catholic faith was the recovering of lost souls in Lutheran territory as well as persuading people out of Europe to convert to Catholicism. A fine example was set by Francis Xavier who became the best know Christian missionary of modern time. He tried to educate the people of the East, particularly in Japan and India on the values of Christianity. The conversion of non-Christians was Loyola's initial motivation in founding his Society and he realised its importance right back in the 1540's when the Jesuits were established. The Papacy also viewed the order as one where their principle function was converting individuals to Catholicism, but particularly those who were Lutheran. As shown by the title given by the Papacy, 'Regimi militantis ecclesiae, when the order was founded in 1542, they were viewed as an almost militant organisation who could counter the Lutherans with their total obedience to the Pope. The Jesuits would not have received the Papal Bull and this particular title if the Catholics did not realise there would be a spiritual armed struggle between the Jesuits and Luther. ...read more.