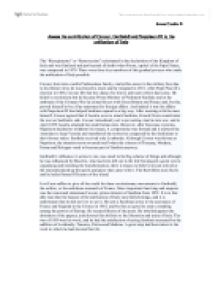 Assess the contribution of Cavour, Garibaldi andNapoleon III to the unification of Italy

Assess the contribution of Cavour, Garibaldi and Napoleon III to the unification of Italy The "Risorgimento" or "Resurrection" culminated in the declaration of the Kingdom of Italy and was finalized and put beyond all doubt when Rome, capital of the Papal States, was conquered in 1870. There were three key members of this gradual process who made the unification of Italy possible. Cavour, born into a noble Piedmontese family, started his career in the military but, due to his liberal views he was forced to leave and he resigned in 1831. After Pope Pius IX's election in 1846, Cavour felt that the chance for him to advocate reform had come. ...read more.

Cavour immediately set to provoking Austria into war, and in April 1859 Austria attacked the small Italian state. However, after ferocious victories, Napoleon decided to withdraw his troops. A compromise was formed and it allowed the Austrians to keep Venetia and transferred the territories conquered by the Sardinians to their former rulers. Sardinia received only Lombardy. Although Cavour was furious at Napoleon, the situation soon reversed itself when the citizens of Tuscany, Modena, Parma and Bologna voted to become part of Sardinia anyway. Garibaldi's influence, it seems to me, was small in the big scheme of things and although he was influenced by Mazzini, who has been left out in the title but played a great role in organising and initiating the ...read more.

It is to this able man that the honour of the unification of Italy most fully belongs, and it is unfortunate that he did not live to see it. He sent a Sardinian army to the assistance of France and England in the Crimea in 1855, and by this act gave his state a standing among the powers of Europe. He secured liberty of the press. He rebelled against the dominion of the papacy, and devoted his abilities to the liberation and unity of Italy. The war of 1859 was his work, and he had the satisfaction of seeing Sardinia increased by the addition of Lombardy, Tuscany, Parma and Modena. A great step had been taken in the work to which he had devoted his life. ?? ?? ?? ?? James Crosbie E ...read more.