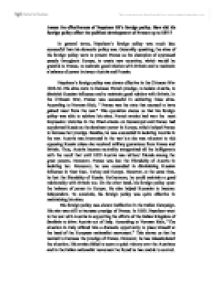 Assess the effectiveness of Napoleon III's foreign policy. How did his foreign policy affect the political development of France up to 1871? In general terms, Napoleon's foreign policy was much less successful than his domestic policy was. Generally speaking, the aims of his foreign policy were to present France as the champion of oppressed people throughout Europe, to create new countries, which would be grateful to France, to maintain good relation with Britain and to maintain a balance of power between Austria and Prussia. Napoleon's foreign policy was shown effective in the Crimean War 1854-56. His aims were to increase French prestige, to isolate Austria, to diminish Russian influence and to maintain good relation with Britain. In the Crimean War, France was successful in achieving these aims. According to Norman Rich, " France was the state that seemed to have gained most from the war." This quotation shows us that his foreign policy was able to achieve his aims. French armies had won the most impressive victories in the Final attacks on Sevastopol and France had supplanted Russia as the dominant power in Europe, which helped France to increase her prestige. Besides, he was succeeded in isolating Austria in the war. ...read more.

He still wanted to increase French prestige, however, he was failed. His encouragement of the Polish rebellion again Russia in 1863 gave rise to cruelly false hopes among Polish patriots, to whom he was unable to give effective aid according to Norman Rich. Such kind of action was failed to increase French prestige and led to further increasing hostile between France and Russia. From the above we can be seen, his foreign policy was proved ineffective again in the Polish Revolt. His foreign policy in the Mexican Campaign was also proved ineffective. His aims were to gain prestige of France and to create new countries, which would be grateful to France. Napoleon wanted to gain prestige by having greater influence in Mexico. Taking advantage of the fact the Civil War left the United States unable to interfere in Mexico, he sent an army to establish a king there. However, he had failed. He lost the friendship of USA at the same time since he violated the Monore Dotrine to interfere in Mexico. He also lost the influence in Mexico as he was worried about the increasing power of Prussia on his eastern border and therefore agreed to withdraw his troops from Mexico. ...read more.