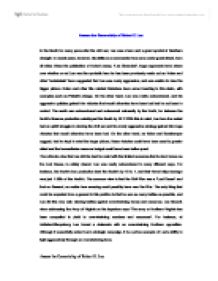 Assess the Generalship of Robert E. Lee In the South for many years after the civil war, Lee was a hero and a great symbol of Southern strength. In recent years, however, his ability as a commander has come under great attack, from all sides. Since the publication of Nolan's essay, "Lee Dissected", huge arguments have arisen over whether or not Lee was the symbolic hero he has been previously made out as. Nolan and other "revisionists" have suggested that Lee was overly aggressive, and was unable to view the bigger picture. Nolan and other like minded historians have some founding in this claim, with examples such as Pickett's charge. On the other hand, Lee was vastly outnumbered, and his aggressive policies gained him victories that would otherwise have been lost had he not been in control. The south was outnumbered and outsourced colossally by the North, for instance the North's firearms production outstripped the South by 32:1! With this in mind, Lee from the outset had an uphill struggle in winning the civil war and his overly aggressive strategy gained him huge victories that would otherwise have been lost. On the other hand, as Nolan and Bonekemper suggest, had he kept in mind the larger picture, these victories could have been used to greater effect and the humanitarian resource budget could have been better spent. The orthodox view that Lee did the best he could with the limited resources that he had, known as the Lost Cause, is widely shared. ...read more.

Lee was vastly outnumbered on all fronts, yet he still managed to crush the Army of the Potomac's morale. One could say that Lee's disregard for loss of life could have lost him the War. After all, the South had many fewer men than the North, and for Lee to send them unequipped and unprepared into situations which would certainly cause massive loss of life. He turned to a war of attrition, and there was no way in which he could win a war of attrition due to the smaller size of his forces. Lee however, can hardly be blamed for the loss of the War, the simple fact was that the North were better supplied, equipped and vastly outnumbered the South. They dwarfed the South, with as Shelby Foote said "One arm tied behind their back". The War was a Lost Cause from the start, with or without Lee. The revisionist view of Lee is that he is the cause of the loss of the Civil War. Bonekemper suggests that the war was lost in the West due to Lee's refusal "to part with troops for this critical theatre". Bonekemper is convinced that Lee played directly into the Union forces' hands by constantly attacking. An ally of his, J.F.C. Fuller once said "the more we inquire into the generalship of Lee, the more we discover that Lee, or rather the popular conception of him, is a myth". ...read more.

Lee, however, won some amazing victories through this method. His victory at Chancellorsville for instance, could never have been done by a different General. The revisionists view that his lack of over view is well grounded, through his aggressive policies. On the other hand however, it was not Lee's responsibility to create National strategy for the South. That was up to Davis, and his national strategy was to defend the South and stop the Union forces. The definition of military strategy was to use the armed forced to carry this out. This however was simply an unobtainable target, but it was Lee's duty to carry it out to the best of his ability. Lee's aggressive strategies no doubt cost huge amounts of life, many of which were lost unnecessarily but this is to be expected in a war where he is vastly outnumbered. Lee was a fantastical commander with a natural ability to lead, but his poor understanding of the long term no doubt cost lives. Many men were needlessly lost, but Lee was simply doing his best to achieve the "National Strategy", something which he should have had no part in - he was simply following orders, and that he did very well. Even Pickett, a man sent to slaughter by Lee, when asked to reflect on who he thought was responsible for the Confederate defeat at Gettysburg said "I always thought the Yankees had something to do with it." ?? ?? ?? ?? Assess the Generalship of Robert E. Lee ...read more.