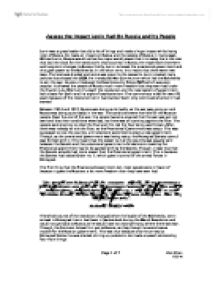 Assess the Impact Lenin Had On Russia and Its People Lenin was a great leader that did a lot of things and made a huge impact whilst being ruler of Russia. He made an impact on Russia and the people of Russia in many ways. Without Lenin, Russia would not be the major world power that it is today. He is the man that laid the track for the revolution's that occurred in Russia. He made both short-term and long-term changes to Russia. Firstly, Lenin removed the provisional government and this gave power to the Bolsheviks. In the short term, this meant that there were new laws. The land was divided and some was given to the peasants. Lenin created many policies that shaped the USSR. He introduced War Communism which led the Bolsheviks to win the war. He also introduced the New Economic Policy (NEP) which was very popular. It allowed the people of Russia much more freedom that they ever had under the Tsarist rule. After Lenin's death the revolution and the new system of government laid a basis for Stalin and his style of totalitarianism. The communists ruled for over 70 years because of the revolution Lenin had started. Stalin only continued what Lenin had started. Between 1914 and 1917, Russia was doing quite badly, as the war was going on and Russia was doing quite badly in the war. The conditions were horrible for the Russian people. Near the end of the war, the people became angered that the war was yet not over and that their conditions were bad, so there was an uprising against the Tsar. The people were starting to rebel the Tsar and this led the Tsar being overthrown. After, there was nobody to rule the Tsar, so the Provisional Government was setup. This was supposed to rule the country, until elections were held to elect a new government. Though, as the provisional government was being setup, the Petrograd Soviets council was formed with it. ...read more.

The only way for Lenin to still have support from the public was if he carried out the promises that he made in his April Theses. These are the first decrees made by Sovnarkom: November * A maximum eight-hour day and 48-hour week declared for industrial workers. * Employment insurance introduced for workers for injuries, illnesses and unemployment. * All titles and class distributions abolished-no dukes or landlords, the title 'comrade' for everybody. * Women declared equal to men. * All non-Bolshevik newspapers banned. December * Liberal party, the Cadets, banned. * All factories to be put under the control workers' committees. * All banks to be taken over by the government. * The army to be more democratic- officers to be elected, no ranks or saluting. * Church land to be confiscated by the state. * Divorce made easier and marriages do not have to be in churches. Russia and the USSR - Fiehn There were also decrees made on land and food in order to carry out his promises made in the April Theses. The land decree made sure that all the land be taken away from both the Tsar and the old landlords and that it was to be given to the peasants. The peasants would then form committees to insure that the land was divided fairly. The food decree was absolutely vital for Lenin to create. It was a priority to get food to the cities. If any peasants would not sell their produce, than Lenin sent out the police and the Cheka to take it from them. The Cheka were a form of secret police set up in December 1917 by Lenin. Its job was to arrest people who were considered to be of threat or dangerous towards the government. It became so serious that if someone spoke badly or opposed the Bolsheviks, they could be shot without even a trial. Lenin used terror to control the people and this became a main feature of his reign as leader. ...read more.

These traders brought goods to stores in large quantities. Another feature of the NEP was that the smaller factories, especially the ones producing consumer goods, were returned to its original owners. They were allowed to sell the goods it produced and make profits. Though, all large industries that produced raw materials, were kept under state control. Only very few larger factories were allowed to sell their products. This resulted in a boost in Russia's economy and helped Russia to become the strong country it is now. Lenin felt that for Russia to progress even further, it needed to become modernised. So he introduced electric power into Russia. This was known as the electrification of Russia. He introduced a great network of power stations which would provide power for modern industries. Lenin believed so much in electric power that he said: "Soviet power plus electrification equals Communism" Russia and the USSR - Fiehn The NEP was a great success and made Russia more prosperous. Russia's economy greatly improved under the NEP. The supply of grain, coal, steel, electricity as well as other things, greatly increased. Also, the average wage of a worker nearly tripled. Therefore Lenin did a great thing by introducing the NEP as it vastly improved Russia and the Russian people. In January 1924, a tragic event occurred. Lenin died because of the many strokes he had earlier. The Russian people were in a state of immense sadness as they realized that they had lost a great leader for Russia. Though, even though Lenin died his policies and ideology led the path for Stalin. It was Lenin that allowed for Russia to become the world power that it is today. It was Lenin who laid the tracks for Stalin and Stalin completed what Lenin did not have enough time to do. Lenin is considered to be one of Russia's greatest leaders and the impact that he had on Russia and its people was great. ?? ?? ?? ?? Page 1 of 7 Zain Khan Y11-4 ...read more.