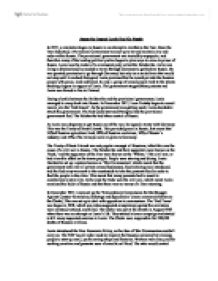 Assess the Impact Lenin Had On Russia

Assess the Impact Lenin Had On Russia In 1917, a revolution began in Russia in an attempt to overthrow the Tsar. Once the Tsar abdicated, a Provisional Government was set up to try and maintain law and order within Russia. The provisional government was incredibly unpopular, and therefore many of the leading political parties began to plan ways to come to power of Russia. Lenin was the leader of a communist party called the Bolsheviks. As he was living in Switzerland, he needed to travel through Germany to get back to Russia. He was granted permission to go through Germany, but only on a sealed train that would not stop until it reached Petrograd. Lenin promised that he would provide the Russian people with peace, land and bread. ...read more.

The Bolsheviks had taken control of Russia. As Lenin was desperate to get Russia out of the war, he signed a treaty with Germany. This was the Treaty of Brest-Litovsk. This provided peace in Russia, but meant that 33%of Russian agricultural land, 80% of Russian coalmines, 50% of Russia's industry, and 25% of its railways were all given to Germany. The Treaty of Brest-Litovsk was not popular amongst all Russians, infact this was the cause of a civil war in Russia. The Bolsheviks and their supporters were known as the 'Reds,' and the supporters of the Tsar were known as the 'Whites.' This civil war, or had a terrible effect on the towns people. People were starving and dieing. ...read more.

The 'Red Terror' was began in 1918, which was when suspected conspirators against the revolution were arrested, tortured, and killed. The Cheka was put at full stretch in August 1918 when there was an attempt on Lenin's life. They started a terror campaign and started to kill many suspected enemies to Lenin. The Cheka were responsible for 200,000 deaths of Russian civilians. Lenin introduced the New Economic Policy, as the idea of War Communism couldn't carry on. The NEP was to make made to improve the Russian economy by allowing people to start up small, profit earning shops and factories. Workers were also paid for working overtime and peasants were allowed to sell food. The state would control most important industries though. This resulted in a raise in the production of food and a decrease in cannibalism. ...read more.