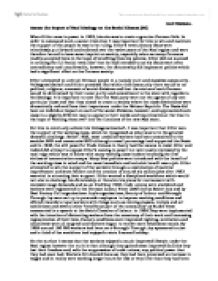 Assess the impact of Nazi ideology on the Social Classes.

Lizzi Middleton. Assess the impact of Nazi ideology on the Social Classes [36] When Hitler came to power in 1933, his aim was to create a genuine German Volk. In order to command such a social revolution it was important for him to win and maintain the support of the people he was to be ruling. Hitler's revolutionary ideas were relentlessly put forward and enforced over the twelve years of the Nazi regime and were therefore bound to leave some imprint on society, especially when so many Germans readily accepted them in the hope of benefiting from his policies. Hitler did not succeed in creating the full 'social revolution' that he had intended to as his ideals were often contradictory and unachievable, however, the dictatorship did implement policies which had a significant effect on the German society. Hitler attempted to unite all German people in a racially pure and classless community- Volksgemeinschaft and Hitler promised that within this community there would be no political, religious, economic of social divisions and that the status of each German would be determined by their racial purity and commitment to the state with regards to his ideology. It is important to note that the Nazi party were not the agents of any one particular class and that they aimed to create a society where the class distinctions were dramatically reduced from their importance under the Weimar Republic. ...read more.

The middle class faced problems following July 1933, when Rudolf Hess defended supermarkets from attacks and restrained the Nazi Combat League of Tradesmen, with small traders continuing to be out priced by department stores, being squeezed between the Reich food estate which controlled agricultural prices, and price freezes in the shops. By 1943 a quarter of a million small shops had gone out of business as the policy of rearmament after 1936 and the switch to a total war economy after 1941 both favoured the larger businesses. What is surprising about figures like this is that, the mittelstand was the class that was the most active in Hitler's consolidation of power and his eventual appointment in 1933 and yet they benefited very little from the Nazi regime and ideology with it having a negative, rather than a positive or even neutral effect on them after the first few years. With the intention of creating and protecting a racially pure, health and economically secure rural community, the Nazis put forward a policy of 'Blood and Soil' and in doing so glorified the role of the peasant farmer as a decent, honest and uncorrupted German. The Nazis believed that this picture was essential; is they were to provide cheap food for cities and so they undertook a series of measures to protect the rural economy. Farmers of small and middle-sized farms were safeguarded by the regime by the Reich Entailed Farm Law of 29th September 1933, which identified farms ...read more.

Many women were easily attracted by the Nazi rhetoric that glorified their status as wives and mothers and Nazi organisations were enthusiastically supported, marriage increased by 130 000 marriages per year, births by over half a million per year between 1933 and 1939. However, the direct impact of Nazi ideology and policies was limited, it is possible that the rising birth rates and the increase in marriages were related more to an increasing prosperity rather than the social policy and with the achievement of full-employment in 1936, women were returning to the workplace, increasing from 11.6 million to 14.6 million between 1933 and 1939. The Nazi policies did not succeed in creating a full social revolution, however, Hitler's revolutionary ideas were persistently enforced over the twelve years of the Nazi regime did succeed in integrating the majority of Germans into one national community, a Volksgemeinschaft and nazi policies did result in some mobility within social groups but did not fundamentally alter the existing class structure of society. It seems that the lower down in society that you were on Hitler's eventual consolidation of power in 1933, the more you benefited from the Nazi ideology. The Nazis promised more than they created for each of the social classes: wages were never considerably increased for the working class, the middle class did not benefit from lower taxes and the social elite were in constant conflict about their value in society. ...read more.