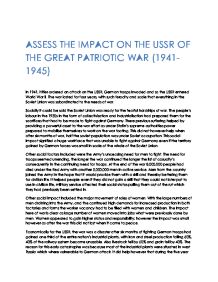 Assess the impact on the USSR of the Great Patriotic War

ASSESS THE IMPACT ON THE USSR OF THE GREAT PATRIOTIC WAR (1941-1945) In 1941, Hitler ordered an attack on the USSR, German troops invaded and so the USSR entered World War II. The war lasted for four years, with such ferocity and scale that everything in the Soviet Union was subordinated to the needs of war. Socially it could be said the Soviet Union was ready for the fearful hardships of war. The people's labour in the 1930s in the form of collectivisation and industrialisation had prepared them for the sacrifices that had to be made to fight against Germany. There previous suffering helped by providing a powerful asset to the war effort as under Stalin's supreme authorities power prepared to mobilise themselves to work on the war footing. This did not however help when after six months of war, half the soviet population was under Soviet occupation. This social impact signified a huge workforce that was unable to fight against Germany even if the territory gained by German forces was small in scale of the whole of the Soviet Union. Other social factors included were the Army's unceasing need for men to fight. ...read more.

On day one of starting the war, the Soviet Union swung into action, organising supervisors of aircraft, guns and tank manufacture. The entire urban workforce was called up to undertake work in armament factories, including all men aged 16-55 and women aged 16-45, all others asked to work at least part time. An impressive impact on the USSR, was the achievement of evacuation of factories in the path of the invading Germans and reconstruction further east. The people were prepared to provide their soldiers with ammunition. During 1942, military expenditure reached enormous levels of 76% of all production accounting to munitions. After the war the Soviet Union had turned into a global superpower with a massive arsenal of nuclear weapons. Russia was one of the most successful countries when it came to designing new weapons. The K34, KV-2 and JS-2 tanks, the Katyusha rocket launcher and the Yak-1 fighter aircraft were all designed during the war being recognised as the best weaponry produced by any nation at the time. The impact of this allowed the Soviet Union slowly stave the invading Germans of resources regulating the forceful scorched earth policy and push them back out of the USSR and even into Berlin at the end of the war. ...read more.

Significantly a man called Vlasov set up a unit in the German army comprising of 50,000 Soviet citizens to fight against the USSR. However in other areas mainly Ukraine, the citizens were loyal as they soon realised under German occupation that Stalin and communism was better than the alternative racial regime of the German's who consistently persecuted the native people. Many groups were set up to attack the occupying Germans. The most significant point to conclude is how many things resulted from the Great Patriotic war in Soviet Russia. Political Impacts of how Stalin emerged victorious and unchallenged with the USSR becoming globally the most nuclear advanced country which gained the country prestige and power. A smaller impact was the cultural effect of division of minority groups brought the whole together to stand united against the German forces once people realised the extreme racial policies the Germans had. The most significant however could be the economic impact. During the war, coal, steel and oil production fell even as the third five year plan had increased these productions. Also the scorched earth policy while damaging land when it was recaptured helped force the Germans to find it hard to rely on their supply lines all the way through Poland in Germany many miles away. ...read more.