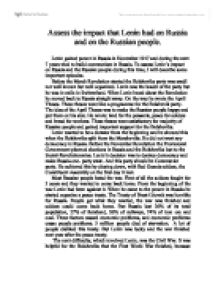 Assess the impact that Lenin had on Russia and on the Russian people.

Assess the impact that Lenin had on Russia and on the Russian people. Lenin gained power in Russia in November 1917 and during the next 7 years tried to build communism in Russia. To assess Lenin's impact on Russia and the Russian people during this time, I will describe some important episodes. Before the March Revolution started the Bolsheviks party was small not well known but well organized. Lenin was the leader of the party but he was in exile in Switzerland. When Lenin heard about the Revolution he moved back to Russia straight away. On the way he wrote the April Theses. These theses were like a programme for the Bolshevik party. The idea of the April Theses was to make the Russian people happy and put them on his side. ...read more.

First of all the solders fought for 3 years and they wanted to come back home. From the beginning of the war Lenin had been against it. When he came to the power in Russia he started organize a peace treaty. The Treaty of Brest-Litovsk was horrible for Russia. People got what they wanted, the war was finished and solders could come back home. But Russia lost 26% of its total population, 27% of farmland, 26% of railways, 74% of iron ore and coal. These factors caused economic problems, and economic problems cause people problems. 5 million people died of starvation. A lot of people disliked this treaty. But Lenin was lucky and the war finished next year after the peace treaty. ...read more.

He stopped it and introduced New Economic Policy (NEP). The idea of the NEP was that each peasant would give a fixed amount of his corn to the government as a tax. The rest he could sell for as much as he wanted. As the result production went up. And Lenin regained the support of the peasants. Also Kulaks began to appear again. In conclusion Lenin ruled USSR in its hardest period. And actually he saved the country. So I think his impact was huge on Russia and Russian people. If you will compare life for average person you can see the huge difference between Russia in 1900 and the USSR in 1924. And all of this Lenin reached since 1917 and until 1923 when he died. But actually he did not rule the country in the last 1 year because of his injury. ...read more.