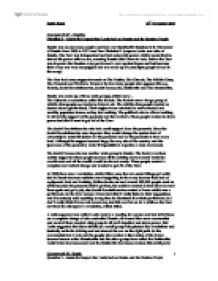 Coursework #1 - Russian Question 2 - Assess the Impact that Lenin had on Russia and the Russian People Russia was an enormous empire and had over 55,650,000 Russians in it. The leader of Russia from 1905 to 1917 was Tsar Nicholas II (emperor) who was ruler of Russia. The Tsar was independent and had autocratic power, which meant that he shared his power with no one, meaning Russia didn't have to vote. Before the Tsar was in power the Russian army performed a war against Japan and lost because their army was very unequipped and was made up of conscripts (people forced in the army). The Tsar had many supporters such as The Nobles, The Church, The Middle Class, The Peasants and Workers. However he had many people who opposed him e.g. Kadets, Social Revolutionaries, Social Democrats, Bolsheviks and The Mensheviks. Russia was made up of three main groups, which were: - The Liberals or sometimes called the Kadets. The Kadets were a large group of middle class people e.g. teachers, lawyers etc. The middle class people wanted an elected duma (parliament). Their support was restricted to well educated and wealthy populated towns, as they had nothing. The political reform offered nothing to attract the support of the peasants and the workers. These people wanted to share power but didn't want to get rid of the Tsar. The Social Revolutionaries who had small support from the peasants. Once the Social Revolutionaries were in power they would change the system land of ownership to make life better for the peasants and for the peasants to have more land. ...read more.

In October the General Kornilovs rebellion helped the Bolsheviks extremely because The Petrograd Soviet thought the Bolsheviks were on their side. People saw the Bolsheviks as the saviours of the 'new' Russia and they grew more and more popular. The Bolsheviks had gained control of The Petrograd Soviet and began to recruit men to the Red Guard. 25,000 joined the Bolshevik military. By October, the law and order had collapsed, the countryside peasants were looting and burning their landowners' estates. On the night of 27th October, Trotsky led the Red Guards to take over vital buildings in Petrograd. One of the buildings was The Winter Palace, where the members of the Provisional Government were meeting. Kerensky then managed to escape and fled the country. The powerful Bolsheviks were the new rulers of Russia. How did Lenin consolidate his power? Lenin consolidated his power in many ways, one of which was when Lenin and the Bolsheviks seized power in the Petrograd, but it wasn't certain that they could hold the power throughout Russia. The Moscow Soviet, for example, fought for days before they gained control over the city. To gain control of the whole of Russia seemed to be an impossible task. Lenin knew that The Provisional Government had failed because the people who put it into power weren't getting the things they wanted so the popularity of supporters of The Provisional Government would decrease. Lenin knowing this didn't want to make the same mistake. Between November 1917 and February 1918 the Bolshevik Government in The Petrograd issued a series of decrees and declarations. ...read more.

In January 1924 Lenin died because of a number of strokes, when Lenin had died everyone realised that there was no deputy or vice person to take over his power. Literally everyone thought Trotsky would become leader because he led the Red army to victory. But instead a member of the Bolsheviks called Stalin, who was known as the man of steel, became the person who held power. Trotsky later on was murdered by one of Stalin's friends. I think Lenin was a very important person in history because he was a good planner, thinker, had ability to write good speeches and send them to the people in a way that they understood and could relate to. He was a person who Russia looked up to as an idol because when he died they changed Petrograd to Leningrad and preserved his body and at this moment is still there for people to go and thank him for what he did. I think if it wasn't for Lenin, then Russia would have been in a worse state at that time. At the start of 1905 Lenin promised that everyone would be equal, I don't think he achieved that but he did boost up the industry and agriculture. The best point about him, I think was that he gave everything he had to the Russian people and experimented and finally got somewhere with what ever he wanted to achieve. By Zahid Rasul Zahid Rasul 20th November 2003 1 Coursework #1 - Russia Question 2 - Assess the Impact that Lenin had on Russia and the Russian People ...read more.