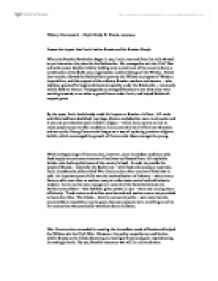 History Coursework - Depth Study B: Russia, 1905-1944 Assess the impact that Lenin had on Russia and the Russian People When the Russian Revolution began in 1917, Lenin returned from his exile abroad to put into action his plans for the Bolsheviks. He managed to win the Civil War and seize power despite initially holding only a small area of the country due to a combination of the Red's own organization and the failings of the Whites. Allied intervention allowed the Bolsheviks to portray the Whites as puppets of Western imperialism, and the support of the ordinary Russian workers and women - who had been granted full legal and electoral equality under the Bolsheviks - eventually led the Reds to victory. Propaganda encouraged Russians to see what they were working towards, to envision a grand future under Lenin, and helped Bolshevik support grow. By the 1920s, Lenin had already made his impact on Russian civilians. All ranks and titles had been abolished, marriage, divorce and abortion were much easier and it was not permitted to teach children religion - which Lenin saw as a trick to make people accept terrible conditions. ...read more.

War Communism succeeded in meeting the immediate needs of Russia and helped the Whites win the Civil War. However, the policy caused terror and famine within Russia as the Cheka becoming increasingly brutal and grain requisitioning increasingly harsh. By 1921, Russia's economy was still in ruins and some provinces were in a state of revolt. Agriculture had also collapsed, with the war and grain requisitioning leading to low harvests. The peasants weren't making profits and saw little point in growing food, and when faced with the drought in 1921, the food shortages led to a famine that killed 5 million people. Achieving peace under the Treaty of Brest Litovsk during the First World War had cost Russia 26% of her population and 27% of her farmland - which only increased the problems of famine still further. Total industrial production continued to fall until 1920, when Russian industry produced about 14% of what it had in 1913. In February 1921, a wave of strikes in Petrograd registered worker protest against Communist ruthlessness, and in March sailors of Russia's Baltic fleet, based in Kronstadt, staged an uprising against Bolshevik rule. ...read more.

Lenin would not permit protests against private enterprise and the class of merchants driven by profit called 'nepmen'. He expected obedience from party members, despite the failures of the NEP. Levels of unemployment remained and problem and prices for manufactured goods were so high that peasants were often unwilling to sell grain due to the little that could be bought with the profits. Lenin was enthusiastic about electricity and believed Russia would benefit from electrification. Perhaps one of his greatest achievements was his building of electric powerstations to provide electricity to businesses and homes in Russia, setting his country well on the road to modernization. Lenin died in January 1924. During his lifetime, he had had a massive impact on Russia and the Russian people. By his death, the average working day had fallen from eleven to eight hours, pensions and benefits had been established and the scouring of religion begun. However, Lenin's Communist ideals initially created a terrible food crisis that neither War Communism nor the 'retreat' of the NEP fully managed to subside. Lenin managed to establish Communism within Russia, although somewhat shakily, by the time of his death, but in doing so created massive unrest and famine among Russian people even while helping them to improve their lives. ...read more.