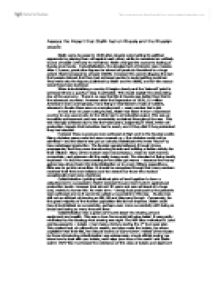 Assess the impact that Stalin had on Russia and the Russian people Stalin came to power in 1928 after cleverly outsmarting his political opponents by playing them off against each other, while he remained an unlikely source of leader until only he remained. Stalin changed the economic footing of Russia enormously. Industrialization, the development of industry was massive. After 13 years, production figures for almost all products flourished to a huge extent. Most increased by at least 1000%. However this cannot disguise the fact that people claimed that they had achieved quotas to avoid getting punished. They were also the figures published by Stalin and the USSR, and for this reason would have been doctored. When industrializing a country it begins slowly and the 'take-off' point is achieved where a quantum leap is activated. This would explain the astounding rise of the economy. There is no way that life in Russia was better than that in the advanced countries. ...read more.

succeeded in that it restored the pre-Communism agricultural production levels. However took almost 30 years and was achieved at a huge cost, mainly to human life. Its main aims - cheap food produced by the peasants were achieved and so it cannot be called unsuccessful in this way. . Russia was still not as efficient at farming as GB, US and Germany though. Conversely, for the great majority of the Russian population life did not improve. Stalin could have industrialized as successfully, perhaps even more successfully with being so brutal and losing so many innocent lives. Collectivisation was a great communist ideal- the sharing of land equipment and wealth. This was a true Communist left-wing belief. It was partly motivated by the ideology that sharing was right. The NEP also motivated it. Land owning peasants - kulaks - had made a fortune during the 1st four-year plan. This created lack of uniformity in wealth, and also made the kulaks, for whom capitalism was their life, the natural enemy of Communism. ...read more.

Stalin succeeded by means of terror in making the Russians believe that what he was doing was right. He also made them believe that the terrorization of his totalitarian rule was the only method that could help Russia. He controlled their ideas through censorship and they died for him, believing they had helped to build a better future for Russia. Stalin did everything 'in the interests of the Party.' He was only killing many people in the Purges because they were working against him, Stalin, the one man who could turn Russia into a modern industrialized country. Therefore if they were working against him then they were betraying the Communist regime and Russia, and deserved to be shot. Had Russia lost to the Germans, it is very feasible that the Germans would have kept hold of Russia and could still be ruling it now. Obviously this would be a huge change for Russia and its population. Even many years after Stalin's death people still idolized him. He had transformed the country, but they couldn't see how much life was wasted to achieve it. ...read more.