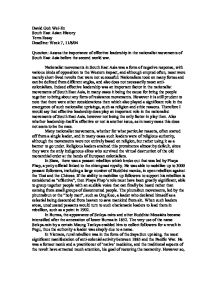 Assess the importance of effective leadership in the nationalist movements of South East Asia before the second world war.

In Burma and Vietnam which experienced a direct foreign invasion, the British and French represented alien cosmologies which threatened the Buddhist and Confucian orders, wide spread resistance could be generated through appeals for a "holy war" to preserve the integrity of a civilization or to restore its greatness. In Burma, the series of wars, military defeats and foreign occupations could not have been viewed in terms of the Buddhist conception of history as signs of the age of world decline, which would be followed by a new age. Thus, the retreat and fall of the Konbaung dynasty, while causing dislocation and a sense of loss, also pointed towards a future in which the kingdom and a perfect Buddhist society would arise and the Future Buddha would finally descend. This ideological context helps explain the forms and intensity of popular resistance to British occupation. Just before the final wars with the British, King Thibaw had announced that he will march forth with his army to expel the British from Burma, to uphold the honour of Buddhism and the country, to "gain for us the notable result of placing us on the path to the celestial regions and Nirvana, the eternal rest. ...read more.

The partly Western-schooled leaders were not so much interested in religious matters or reform as in the search for a Burmese identity. There were also tensions arising from economic issues, in many colonies, there was more than just one community, and very often the Chinese and the Indians were targeted as they played an important economic role and thus the dislike coming from the indigenous people. As mentioned earlier the Sarekat Islam of Indonesia was not just based fully on the premise of religion, it was initially set up to counter the Dutch and Chinese economic dominance, formed in 1912 when both groups had considerable economic influence in the Indies. They organized boycotts against Chinese merchants, which ended up in violence in the beginning of 1912. In conclusion, as seen above, there are various factors in play concerning the nationalist movements in Southeast Asia, namely leadership, religion, economic interest. As seen above, religion seems to play a very important role in most of the movements, it being the binding force of the people. However in my opinion, I would think that still effective leadership is more important than religion as it is that brings the different segregated groups of people together into an organization with a stronger political voice. Thus the effective leadership is of great importance in the nationalist movements of Southeast Asia. ...read more.