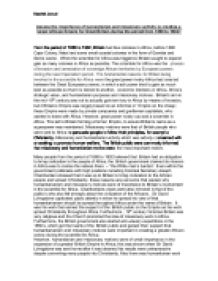 Assess the importance of humanitarian and missionary activity in creating a larger African Empire for Great Britain during the period from 1868 to 1902?

Assess the importance of humanitarian and missionary activity in creating a larger African Empire for Great Britain during the period from 1868 to 1902? From the period of 1868 to 1902, Britain had few colonies in Africa, before 1880 Cape Colony, Natal and some small coastal colonies in the form of Gambia and Sierra Leone. When the scramble for Africa was triggered, Britain sought to expand gain as many colonies in Africa as possible. The scramble for Africa was the process of invasion and annexation of sovereign African territories by European powers during the new Imperialism period. The fundamental reasons for Britain being involved in the scramble for Africa were the great power rivalry Africa had created between the Great European powers, in which each power tried to gain as much land as possible so that it is denied to another, economic interests in Africa, Africa's strategic value, and humanitarian purposes and missionary motives. Britain's aim in the mid-19th century was not to actually gain territory in Africa by means of invasion, but it Britain's Empire was largely based on an informal or 'Empire on the cheap', these Empire were made by private companies and gentleman capitalists, who wanted to trade with Africa. However, great power rivalry caused a scramble in Africa. This led to Britain forming a formal Empire, to ensure Britain's name as a superpower was maintained. ...read more.

Such economic factors as these caused Britain to invade and annex vast amounts of land in Africa, and probably make economic factors the most fundamental in the reasons of African expansion. Dissimilarly, economic aspect did not gain Britain as much land as possible due to the informal Empire as only a few entrepreneurs were actually able to gain control of territory for long periods of time. However, this did not explain the vast amounts of land Britain conquered, that had no economic value such as the Sudan, which was mostly desert. To define these annexations we must look elsewhere. Overall, i would definitely say that the importance if economic reasons for Britain's partake in the scramble for Africa, and expansion outweighs it reasons for unimportance as Britain, as most of the land annexed by Britain was due to economic reasons. In addition, public opinion also played a very small part in creating a larger African empire in Africa. The government usually did not take notice of public opinion, but usually took their opinions into account when it was election time. Also, the government only listened to the British public in a major matter when in 1898 the public demanded revenge for Sir Gordon's murder by the Mahdi revolt, this led to the re-invasion of Sudan, and this was mostly influenced by the public's opinion. However, the British government had other reasons that affect this invasion for example, the buffer around Egypt to ensure that Egypt was safe, moreover, the British public had not directly asked for the annexation of the Sudan only revenge. ...read more.

All in all, i believe that humanitarian and missionary motives had little effect in creating a larger African Empire, as overall it barely gained Britain any land in Africa, as even the greatest humanitarianists were returned home due to unimpressive results. i do believe that Britain's primary reason in getting a larger Africa was economic prospects that led to invasion and annexations of African lands. Britain gaining a larger Empire was not due mostly to the effect of public opinion, as the government only listened to the public when it was election time. Moreover, great power rivalry from other great European powers, did make Britain gain a vast amount of land as they acquired huge territories just to deny it to others. Additionally, the strategic importance of certain lands in Africa, including the large Egypt and the Cape Colony, i also recognise by this that some reasons for creating a larger African empire were of mixed reasons like economic and strategic in Egypt. However with taking all of these factors into account i realise that economic factors mostly made Britain have a larger African Empire for example in the west the lands of Nigeria and Sierra Leone, in the west lands like Zanzibar and Uganda, in the north sudan and Egypt and in the south the cape colony and the Transvaal, with that said humanitarian and missionary activity were minor in creating a larger African Empire. ?? ?? ?? ?? Kastriot Jonuzi ...read more.