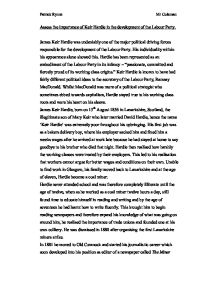 Assess the importance of Keir Hardie in the development of the Labour Party.

Assess the importance of Keir Hardie in the development of the Labour Party. James Keir Hardie was undeniably one of the major political driving forces responsible for the development of the Labour Party. His individuality within his appearance alone showed this. Hardie has been represented as an embodiment of the Labour Party in its infancy - "passionate, committed and fiercely proud of its working class origins." Keir Hardie is known to have had fairly different political ideas to the secretary of the Labour Party, Ramsay MacDonald. Whilst MacDonald was more of a political strategist who sometimes ebbed towards capitalism, Hardie stayed true to his working class roots and wore his heart on his sleeve. James Keir Hardie, born on 15th August 1856 in Lanarkshire, Scotland, the illegitimate son of Mary Keir who later married David Hardie, hence the name 'Keir Hardie' was extremely poor throughout his upbringing. His first job was as a bakers delivery boy, where his employer sacked him and fined him a weeks wages after he arrived at work late because he had stayed at home to say goodbye to his brother who died that night. Hardie then realised how harshly the working classes were treated by their employers. ...read more.

One of the first debates that Hardie was actively involved in was his claim that people earning more than �1,000 a year should pay a higher rate of income-tax and the extra revenue should be spent on pensions and free education for working class children. In the early 1990's as socialist groups such as the Social Democratic Party and the Fabian Society became more prominent, Hardie became one of the main influences in the establishment of the Independent Labour Party, at the opening conference he was elected chairman and leader of this party. Without the Independent Labour Party, the Labour movement would have no vitality or focus. However, this new found vitality ebbed after his defeat in the 1895 election and Hardie's prophetic comment "we must learn how to fight elections" resonated in the minds of leading trade unionists and socialists alike. Between 1895 and 1900 Hardie worked hard to improve and increase the popularity and policies of the ILP. He focused his mind on uniting the trade unions with the Independent Labour Party so that a clear and resonant message was sent to those working men with the franchise. He made good use of his position as editor of the Labour Leader (previously known as The Miner) ...read more.

Hardie, although one of the key figures in the political development of the Labour Party, was not the only reason for its success. Ramsay MacDonald was more skilful in the House of Commons and it was he who was responsible for the 'lib-lab' pact of 1903. The increasing influence of the trade unions was essential as most of the members of the LRC were trade union members and it is because of their trade union membership that they joined the LRC. The various socialist groups, such as the Social Democratic Party and the Fabian Society ever increased the membership tolls of first the ILP and then the LRC. The impact of the Taff Vale strike of 1901 can be seen as a success in the way that it made the leaders of the LRC use more politically just strategies to gain prominence rather than encouraging unions to go on strike. However James Keir Hardie established himself as a figure of almost legendary status, the folk-hero of Labour Mythology. His individuality, commitment and charisma was like no other politician ever to set foot in the House of Commons. From the beginning of his socialist beliefs when he was sacked by his employer for turning up for work late after looking after his dying brother, to his death in 1915 when he still campaigned actively against the first world war. ?? ?? ?? ?? Patrick Rynne Mr Coleman ...read more.