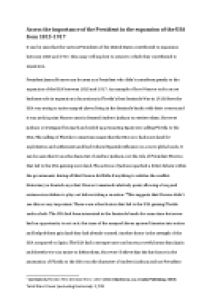 ﻿Assess the importance of the President in the expansion of the USA from 1815-1917 It can be seen that the various Presidents of the United States contributed to expansion between 1815 and 1917, this essay will explore to extent to which they contributed to expansion. President James Monroe can be seen as a President who didn?t contribute greatly to the expansion of the USA between 1815 and 1917. An example of how Monroe took a more backseat role in expansion is his actions in Florida?s first Seminole War in 1918. Here the USA was trying to unite escaped slaves living in the Seminole bands with their owners and it was at this point Monroe sent in General Andrew Jackson to retrieve them. However Jackson overstepped his mark and ended up pressuring Spain into selling Florida to the USA. The selling of Florida to American meant that the USA now had more land for exploitation and settlements and had reduced Spanish influence on a more global scale. It can be seen that it was the character of Andrew Jackson, not the role of President Monroe that led to the USA gaining more land. The actions of Jackson sparked a bitter debate within the government; during all this Monroe did little if anything to subdue the conflict. Historian Joe Knetsch says that Monroe ?remained relatively quiet, allowing a long and acrimonious debate to play out before taking a vacation.?[1]This suggests that Monroe didn?t see this as very important. ...read more.

The war ended with the Treaty of Guadalupe ? Hidalgo which saw the USA gain, amongst other states, Arizona and California. When Polk became President one of his aims was to gain California, and so it can be seen that Polk provoked the Mexican- American war to fulfil his goals. This point is supported by Walter LaFeber who says ?The president?s policy was both simple and devious. He slowly squeezed Mexico military until it struck back. He then misrepresented the evidence for the attack to obtain Congresses? declaration of war?[5] this shows us that the President was antagonising war for the expansion of the USA. An example of this is when Polk sent in US military commander Zachary Taylor. He moved into land that was disputed between Mexico and Texas, this led to the involvement of the Mexican army who attacked the USA in defence of their land; which led to the subsequent war. Another factor in the causes of the Mexican American War is the Manifest Destiny. This was a doctrine that suggested that America had the god given right to expand. It can be seen that Polk?s belief in the Manifest Destiny is what led to the US involvement in the Mexican-American war. This idea is supported by Gary B. Nash and Julie Roy Jeffery, ?The cause of the Mexican American war was Manifest Destiny and American expansionism[6]?. This shows that it was the Manifest Destiny that influenced Polk?s plans for expansion, and that without it he may not have pursued expansion as much as he did. ...read more.

I believe that President?s Monroe and Lincoln were similar in the types of expansion they achieved. Monroe created the Monroe Doctrine which served as the backbone to many future Presidents, such as Roosevelt?s, expansion plans. The aim to keep all American land American contributed to expansion more in the sense that it helped strengthen the country and created relations with Latin America which in turn encouraged trade and commerce between Britain and Latin Americans colonies. President Lincoln contributed to the expansion of the USA by increasing the Union?s population though the Emancipation Proclamation. Therefore it can be seen that the role of the President was important in the expansion of the USA from 1815 to 1917 because it was their personalities and political power that led to geographical and social expansion. Total Word Count (excluding footnotes): 1,789 ________________ [1] Joe Knetsch, Florida?s First Seminole Wars:: 1817-1858, (Charleston, s.C, Arcadia Publishing, 2003) [2] Milton Meltzer, Hunted Like a Wolf: The Story of the Seminole War (Sarasota, Florida, Pineapple Press inc. 2004) page 56. [3] Grant Foreman, Indian Removal: The Emigration of the Five Civilized Tribes of Indians (Civilization of the American Indian Series)(Norman, University of Oklahoma Press, 1974) [4] Elliot West, Trail of Tears: National Historic Trial (USA, Western National Parks Association, 2000) page 9 [5] Walter La Feber, The American Age: United States Foreign Policy at home and Abroad 1750 to the present (Cornell, Norton, W. W. & Company Inc, 1994) [6] Gary B. Nash and Julie Roy Jeffery, The American People: Creating a Nation and Society (Prentice Hall, 2008) [7] http://www.civilwar.org/education/history/faq/ 11th January 2013 [8] Warren H. Hassler Jr. http://www.britannica.com/EBchecked/topic/19407/American-Civil-War/229879/The-cost-and-significance-of-the-Civil-War ...read more.