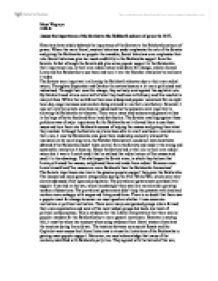 Assess the importance of the Soviets to the Bolshevik seizure of power in 1917.

There is no doubt that there was a popular want for change however we must question whether it was economic motivation or political motivation. There were many unorganised groups whom formed their own organization and were of the most radical groups but had a low level of political consciousness. This is evidence for the Liberal interpretation that there was no popular mandate for the Bolsheviks but a more general movement. However in saying this, it must be taken into account when using evidence from liberal western historians the tensions during the cold war. The tensions between communist Russia and the Capitalist west causes the Liberal historians to stress the limitations of the Bolsheviks in gaining mass popular support. Moreover, we must acknowledge that many of the workers, identified with Bolshevik party line. They agreed with the hatred of the war, bitterness to the Bourgeoisie and moreover, had a drive for local level democracy through the local soviets and factory committees. This shows a commitment to socialism and not just change. We see this commitment and popular support of the Bolsheviks from the Soviets in the November election within the urban working class where they won 70% of the vote. ...read more.