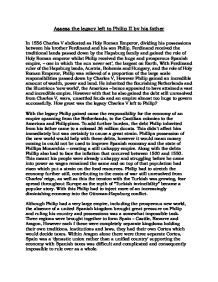 Assess the legacy left to Philip II by his father In 1556 Charles V abdicated as Holy Roman Emperor, dividing his possessions between his brother Ferdinand and his son Philip, Ferdinand received the traditional lands passed down by the Hapsburg family and gained the role of Holy Roman emperor whilst Philip received the huge and prosperous Spanish empire, - one in which 'the sun never set', the largest on Earth, With Ferdinand ruler of the Hapsburg lands, Austria, Bohemia and Hungary, and the role of Holy Roman Emperor, Philip was relieved of a proportion of the large scale responsibilities passed down by Charles V, However Philip gained an incredible amount of wealth, power and land. He inherited the flourishing Netherlands and the illustrious 'new world', the Americas - hence appeared to have attained a vast and incredible empire. However with that he also gained the debt still unresolved from Charles V, wars, unsettled feuds and an empire almost too huge to govern successfully. How great was the legacy Charles V left to Philip? ...read more.

Within Aragon alone there were three separate Cortes, Spain was a 'dynastic union rather than a unified country' supporting the economy with Spanish taxes was difficult and complicated and consequently impossible to rule over as a whole. Castile was one of the richest Spanish kingdoms and a key player of the monarchy and therefore most of it was very independent from rest of the empire. The other provinces in the Monarchia like the Netherlands and Italy did not regard themselves as a part of the Spanish empire though acknowledged to be ruled by Phillip. All in all Phillips Monarchia was extremely divided making it a liability especially with threats of war and a struggling economy. With in these geographical and political problems lay the underlining internal crises - Religion. Philip was a very religious man and with his connections to the Holy Roman Emperor, he felt a duty to protect Catholicism -so gaining his title of the 'Most Catholic King'. Protestantism was a surfacing problem; more and more princes began breaking away from the church, regaining the power the pope had so much control over. ...read more.

However stripping these countries of their own economic prosperity would always be a risk, and could easily backfire. Charles V left an impressive legacy an incredible and vast empire which included the inspiring discoveries of 'new' lands. He provided Philip an access to a range of different countries which could provide different riches and wealth. However with this diversity came the difficulty of rule, the inheritance was remarkable one, a notable and imposing empire which was to have effect on much on the world. However, the troubles that came along with the greatness were numerous and problematic to say the least. Phillip faced difficulty from the very start, financial problems were some of the most posing, this is reflected in the collapse of the economy which resulted in Spain's bankruptcy, yet the security of a large empire would allow Philip to recover. Difficulties and problems with such a great legacy were something which was inevitable, and now with such an empire it would be Philips chance to prove him self in dealing with these problems. Charles V did not just leave a lot of land, power and wealth, but a challenge which at times would seem almost impossible. ...read more.