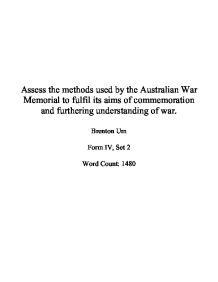 Assess the methods used by the Australian War Memorial to fulfil its aims of commemoration and furthering understanding of war.

Assess the methods used by the Australian War Memorial to fulfil its aims of commemoration and furthering understanding of war. Brenton Um Form IV, Set 2 Word Count: 1480 The Australian War Memorial fulfils its aims by commemorating through understanding. It promotes awareness of war through an extensive historical collection of relics, a multitude of dioramas and hundreds of historical accounts concerning all military conflicts that common Australian soldiers have been associated with. As a result an illustration of actual warfare is presented, not a romanticised ideal so often related to military conflict. Through this, the memorial establishes remembrance which in turn commemorates those that gave the ultimate sacrifice for their country. Yet the memorial also honours those that offered their lives through both symbolism, which is evident in all buildings, and the commemorative area. Throughout his extensive travels throughout battlefields of Europe and Gallipoli as Australia's official war correspondent throughout the First World War, Charles Edwin Woodrow Bean gained an insight to the life of a fighter, be he a common soldier or high ranking General. With this knowledge he established a dream to construct a war memorial that would, 'explain to Australians what their men had done and what they experienced in the war.' With this vision he asked not historians, but the soldiers themselves to amass relics that they found suitable in representing the war. ...read more.

Along with this, the War Memorial provides extensive documentation from all military conflicts, be they World War I or Vietnam. These historical reports from the likes of Bean, Jose and Butler, are offered by the War Memorial through its extensive archives. They serve two purposes. One is that they present the horrors of war, often through the eyes of those present at the scene, with marvellous accuracy and detail. Secondly, they are often filled with critical analysis, and these more often than not, illustrate a general consensus of feeling within the general public at that time. Through both these intentions they produce an in depth recount of the many wars Australia has partaken in throughout her In fulfilling its goal in commemorating those that served their Australia in war, the National War Memorial also houses a prominent commemorative area, a place of reflection and remembrance. Surrounded by spectacular marble and making up the heart of the memorial itself, this section comprises of the Roll of Honour, Hall of Memory and Courtyard. The Roll of Honour, records the names of over 100 000 service men who gave their lives for their country. Engraved on bronze tablets, here names are not ranked, yet all treated and regarded as equal men and women with the utmost respect in accordance with 'Charles Bean's idea of an equality of sacrifice.' It is here that these people are immortalised for what they have done, although essentially in name only, and the War Memorial's ...read more.

Its displays are all easily accessible, and do not suffocate the beholder with long texts and essays and therefore emplace knowledge within the beholder in a simple fashion. Along with this, its continued exploit in commemorating all the sacrifices made for the security of Australia in every opportunity, calls to mind an emotion of gratitude and thanksgiving. The Australian War Memorial not only fulfills its aims, but supersedes them offering a comprehensive guide to military action during our nation's short but active history. Its presentation inspires wonder and its attention to detail is miraculous. The Australian War Memorial reaches its goals of furthering understanding and commemorating, by weaving the two aims together in producing a polished approach in recounting military conflict of decades past. It furthers understanding through the overflowing historical material present, and with this commemorates those that gave the ultimate sacrifice by evoking remembrance. Its also honours those that fought for Australia through a dedicatory area that proves to be a great leveler, praising men great and small as equals. Its effectiveness, although solely relying upon the eyes of the beholder, is enhanced in every way through its layout and accessibility. It is without a doubt that the Australian War Memorial fulfills and surpasses every one of its goals and more than satisfies Charles Bean's description of the building as, 'Here is their spirit, in the heart of the land they loved, and here we guard the record which they themselves made. ...read more.