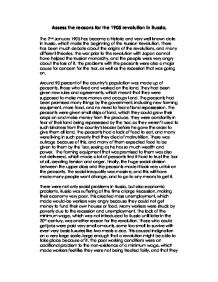 Assess the reasons for the 1905 revolution in Russia.

Assess the reasons for the 1905 revolution in Russia. The 2nd January 1905 has become a historic and very well known date in Russia, which marks the beginning of the Russian Revolution. There has been much debate about the origins of the revolutions, and many different theories. The war prior to the revolution with Japan cannot have helped the Russian monarchy, and the people were very angry about the loss of it. The problems with the peasants were also a major cause for concern for the Tsar, as well as the recession that was going on. Around 90 percent of the country's population was made up of peasants, those who lived and worked on the land. They had been given new rules and agreements, which meant that they were supposed to make more money and occupy land. The peasants had been promised many things by the government, including new farming equipment, more food, and no need to fear of land repossession. ...read more.

This caused indignation on a very large scale, large enough that a revolution might be able to take place because of it. The poor working conditions were an additional problem to the non-existence of a minimum wage, which made workers feel like they were not being treated fairly, and that they should have basic rights, which meant that they were paid reasonable amounts and worked in conditions that were not harmful to them. Reformers were very common in the months prior to the 1905 revolution. A Union of Unions was created to enforce fair workers rights, but the Tsar did not meet this with much delight. Many reformers stirred up commotion between the ruler and the people, in an attempt to bring the monarchy down and begin a reformation of the country. The government proceeded to relax censorship to try to appease opposition - but this just led to a flood of anti-Tsarist propaganda. A reformer called Egor Sazanov on 28th July 1904 through a bomb into the carriage containing Vyacheslav Plehve, the then Secretary Of State for Finnish Affairs. ...read more.

Bloody Sunday occurred on the 9th January 1905. Huge groups of protesters gathered in St. Petersburg, the capital of Russia, demanding a list of things from the Tsar in a position. The people did not realise that the Tsar was not actually in St. Petersburg at all. The protest was unarmed and peaceful, which is one of the reasons why there was such a huge outcry after hundreds of people were killed and possibly thousands more injured, due to shooting by the Tsar's security and by trampling from the mass panic of the event. The people of Russia knew revolution must be secured for the madness to end, and Bloody Sunday was the beginning of it. To conclude, the evidence shows that there were many different reasons for the 1905 revolution in Russia. Bloody Sunday in my opinion was the most important, due to such a large amount of people being killed after a peaceful protest. Temperatures between the government and its people had been rising for a long time, back before 1850, and the peasants' problems and the very weak economy were also major factors into the reasons for this reformation. ...read more.