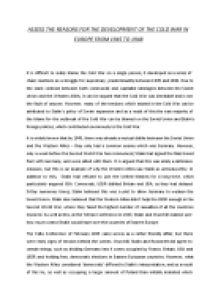 Assess the reasons for the development of the Cold War

﻿ASSESS THE REASONS FOR THE DEVELOPMENT OF THE COLD WAR IN EUROPE FROM 1945 TO 1948 It is difficult to solely blame the Cold War on a single person; it developed as a series of chain reactions as a struggle for supremacy, predominantly between 1945 and 1948. Due to the stark contrast between both communist and capitalist ideologies between the Soviet Union and the Western Allies, it can be argued that the Cold War was inevitable and is not the fault of anyone. However, many of the tensions which existed in the Cold War can be attributed to Stalin?s policy of Soviet expansion and as a result of this the vast majority of the blame for the outbreak of the Cold War can be blamed on the Soviet Union and Stalin?s foreign policies, which contributed enormously to the Cold War. It is widely known that by 1945, there was already a mutual dislike between the Soviet Union and the Western Allies ? they only had a common enemy which was Germany. However, only a week before the Second World War has commenced, Stalin had signed the Nazi-Soviet Pact with Germany, and were allied with them. ...read more.

It is widely believed that this was in response to the ?Iron Curtain? speech that Winston Churchill had given in Fulton, Missouri in March 1946, where Churchill had called for a western alliance to combat the threat. Stalin had called the speech a declaration of war, and defended his creation of the ?Iron Curtain?, calling it a defensive measure. This worried USA to a great extent, as it had now become stark that Stalin was achieving what he desired: for communism to take precedence over capitalism. This severely conflicted with the ideologies of the Western Allies, who believed in the right to assemble their own political parties as well as freedom of speech and press. The distinctly contrasting ideologies meant there was no room for compromise ? both sides feared each other to an extent as they believed each other had the power to diminish their political positions. Another hugely contributing development which led to the Cold War was the rivalry for power which was prevalent at the time. It was inevitable that there would be some competition between both the Soviet Union and USA as a result of them both being two of the biggest powers in the world. ...read more.

Broken promises from the Soviet Union in rgard to the Yalta and Potsdam conferences can be seen as one of the main reasons too ? however, it can be argued that this was solely due to the nation not being included in the politics of the Western world. Both Western Allies and the Soviets had a mutual distrust of each other and it was inevitable that they were not going to co-operate with ease. Despite, all of the faults that USA made, it does boil down to the individuals who were central to the conflict: Stalin and Truman. Stalin strongly desired dominance and for Communism to become the leading political stance in Europe. He seemed to often state that his actions were purely defensive measure, as he saw a buffer zone as essential, yet he had clearly outlined his desire to expand the Soviet empire in speeches to his own people. Based on this, it can be argued that Stalin?s expansionist policy was the main catalyst to the Cold War, and whilst Truman was not blameless, it was the Soviet Union intending to expand its empire, not USA. Stalin?s inappropriate actions led to a chain-reaction of events which resulted in growing tensions and finally the Cold War. Therefore, the majority of the blame should be placed upon Stalin and the Soviet Union. ...read more.