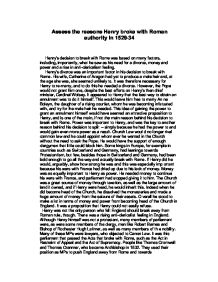 Assess the reasons Henry broke with Roman authority in 1529-34.

Assess the reasons Henry broke with Roman authority in 1529-34 Henry's decision to break with Rome was based on many factors, including, importantly, what he saw as his need for a divorce, money and power and a rise in anti-clericalism feeling. Henry's divorce was an important factor in his decision to break with Rome. His wife, Catherine of Aragon had yet to produce a male heir and, at the age she was, she seemed unlikely to. It was therefore necessary for Henry to re-marry, and to do this he needed a divorce. However, the Pope would not grant him one, despite the best efforts on Henry's then chief minister, Cardinal Wolsey. It appeared to Henry that the best way to obtain an annulment was to do it himself. This would leave him free to marry Anne Boleyn, the daughter of a rising courtier, whom he was becoming infatuated with, and try for the male heir he needed. This idea of gaining the power to grant an annulment himself would have seemed an attractive proposition to Henry, and is one of the main, if not the main reason behind his decision to break with Rome. ...read more.

Indeed when he did become head of the Church, he dissolved the monasteries and made a huge amount of money from the seizure of their assets. Overall he stood to make a lot in terms of money and power from becoming head of the Church in England. It was a proposition that Henry could not easily refuse. Henry was not the only person who felt England should break away from Roman rule, though. There was a rising anti-clericalist feeling in England. Although Henry himself was not a protestant, many members of parliament were, as were some members of the clergy, men like Robert Barnes and Bishop of Rochester Hugh Latimer, as well as many members of the nobility. Many of these MPs were lawyers, who objected to Canon Law. It was this parliament that passed the Acts that broke with Rome, such as the Act in Restraint of Appeal and the Act of Supremacy. People like Thomas Cromwell and Thomas Cranmer, who became Archbishop in 1532. They used their position as MPs to push England away from Rome and towards Protestantism. ...read more.

Overall were many reasons Henry chose to break with Roman authority. Firstly, he wanted to divorce his wife, Catherine of Aragon. When the Pope, however, refused to grant him this divorce, he had problems that he felt only he could solve. Secondly, Henry stood to gain a lot of power and money from being the head of the Church; he would be the only power in England, and all the wealth of the Church would go to him - tax and land. As well as this, there was a rising anti-clericalist/protestant feeling in England, especially amongst lawyers (many members of parliament were lawyers), and this feeling even reached the family of Anne Boleyn, Henry's future wife. Fourthly, and quite importantly, Henry split with Rome simply because he could -he had the power and enough of the Church behind him, and it would impress other European rulers if he had complete control over his subjects, rulers Henry wanted to impress. It appears a combination of these factors was the cause for Henry to break with Roman rule in the 1520/30's, but the divorce and the rise in anti-clericalist feeling were the most important, for Henry at least, not necessarily the country. ...read more.