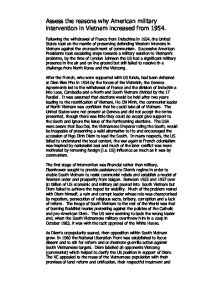 Assess the reasons why American military intervention in Vietnam increased from 1954. Following the withdrawal of France from Indochina in 1954, the United States took on the mantle of preserving defending Western interests in Vietnam against the encroachment of communism. Successive American Presidents took escalating steps towards a military solution to Vietnam's problems, by the time of Lyndon Johnson the US had a significant military presence in the air and on the ground but still failed to resolve the challenge from North Korea and the Vietcong. After the French, who were supported with US funds, had been defeated at Dien Bien Phu in 1954 by the forces of the Vietminh, the Geneva Agreements led to the withdrawal of France and the division of Indochina into Laos, Cambodia and a North and South Vietnam divided by the 17 Parallel. It was assumed that elections would be held after two years leading to the reunification of Vietnam, Ho Chi Minh, the communist leader of North Vietnam was confident that he could take all of Vietnam. ...read more.

As Diem's unpopularity soared, then opposition within South Vietnam grew. In 1960 the National Liberation Front was established to focus dissent and to stir for reform and orchestrate guerrilla action against South Vietnamese targets. Diem labelled all opponents Vietcong (communist) which helped to clarify the US position in support of Diem. The VC appealed to the mass of the Vietnamese population with their promises of land reform and unification, their respectful treatment and persuasion of the peasants enabled them to win over the 'hearts and minds' of the people. As support for the VC grew then South Vietnam needed greater assistance from the United States in dealing with the insurgency. President Kennedy introduced military advisers including the Green Berets, but 16,000 Americans could not effectively deal with the scale of the task, especially with the continued supply of equipment coming from Hanoi. Tactics such as Strategic Hamlets also failed by increasing the antagonism felt towards the Saigon regime and played into the hands of the VC. ...read more.

The commitment to South Vietnam was therefore seen as a vital dam to prevent takeover by communist forces. US Presidents were also determined to present an image of being tough on communism, the quagmire theory suggests that successive Presidents had to continue escalating as none of them wanted to accept the fall of Vietnam to communism on their watch, but also did not want to fully commit troops which could be unpopular. American intervention was primarily determined by the context of the Cold War, the US could not sanction the loss of Vietnam to communism and the further the US got embroiled in sustaining the unsustainable in South Vietnam, the harder it became to pull out. Continued US involvement in turn inspired nationalist as well as communist resistance which resulted in an even more difficult situation to resolve. Johnson's strong military intervention came as a result of years of piecemeal support to a corrupt regime which failed to win the 'hearts and minds' of the Vietnamese people, when Ho Chi Minh and North Vietnam could offer unity and independence, the US presence could, realistically, offer only continued conflict. ...read more.