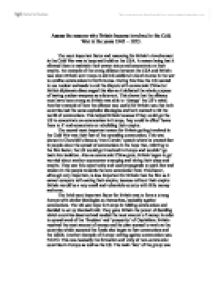 Assess the reasons why Britain became involved in the Cold War in the years 1945 &quot; 1953.

Assess the reasons why Britain became involved in the Cold War in the years 1945 - 1953. The most important factor and reasoning for Britain's involvement in the Cold War was to keep and build on the USA. A reason being that it allowed them to maintain their power status and concentrate on their empire. An example of the strong alliance between the USA and Britain was when Britain sent troops to aid US soldiers in South Korea in the war to confine communism in North Korea. During this time the US wanted to use nuclear warheads to end the dispute with communist China but British diplomats discouraged this idea as it defeated the whole purpose of having nuclear weapons as a deterrent. This shows that the alliance must have been strong as Britain was able to 'change' the US's mind. ...read more.

This factor, although very important, is less important for Britain than the first as it cannot compete with saving their empire, because without their empire Britain would be a very small and vulnerable country with little money and arms. The third most important factor for Britain was to form a strong Europe with similar ideologies as themselves, basically against communism. The US saw hope in Europe in ridding communism and decided to set up Marshall Aid. They gave Britain the power of deciding which countries deserved and needed the most amount of money in order to spread word of the 'freedom' and 'prosperity' of Capitalism. Britain received the most amount of money and the plan seemed to work as the countries which accepted the funds also began to fear communism and the USSR. ...read more.

This would obviously be useful as it could help fund their empire and the arms that had to be built to maintain status in the war. But, this is the least important factor because there was also a lot of money to be lost by joining the cold war. For example millions of pounds were spent on arms so that soldiers could be sent over to South Korea to aid the US. Also, this factor is less important then the empire because the British Empire brought much more money and status than joining the cold war could ever give. As time changed between 1945 and 1953 the reasons for Britain joining the Cold War also changed. For example at the start, Britain's empire was most important by far. But by the end the fear of communism became very important as the capitalist countries had to get their people on their side and used propaganda to stir hatred towards countries like China and the USSR. Thomas Gunhouse ...read more.