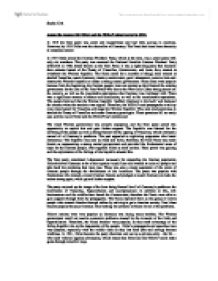 Assess the reasons why Hitler and the NSDAP gained power in 1933:

Assess the reasons why Hitler and the NSDAP gained power in 1933: In 1919 the Nazi party was small and insignificant and had little success in elections. However, by 1933 Hitler was the chancellor of Germany. The Nazis had risen from obscurity to complete control. In 1919 Hitler joined the German Workers' Party, which at the time, was a small party with only six members. The party was renamed the National Socialist German Workers' Party (NSDAP) in 1920, better known as the Nazi Party. It was a right-wing party that declared their extreme hatred of the Treaty of Versailles, Communism, and Jews; they wanted to overthrow the Weimar Republic. The Nazis stood for a number of things; they wanted to abolish Versailles; rearm Germany; destroy communism; gain Lebensraum; remove Jews and destroy the Weimar Republic to create a strong central government. These ideas were popular because from the beginning, the German people were not content as they blamed the existing government for the loss of the First World War due to the War Guilt Clause being pinned on the country, as well as the inequitable stipulations that Germany was lumbered with. There was a significant amount of shame and humiliation, as well as the unendurable reparations. The people believed that the Weimar Republic 'stabbed Germany in the back' and betrayed the country when the armistice was signed. ...read more.

The Munich Putsch was a defining moment for Hitler and the Nazis and the failure persuaded Hitler that the only way of gaining power was by legal means. It also led to the amendment in their approach between 1924-1929 that saw significant gains for the party. Hitler reorganised the party, starting by asserting his status as Fuhrer of the Nazis, which meant there was to be total obedience to him. Also, Branches of the party were set up as well as paramilitary organisations being set up. There was a need to restructure the party as the new changes made the party look strong and regimented, which engrossed and attracted more members from different classes of society, for example, many ex-soldiers and young people were attracted by the uniforms of the SA; the image of order and discipline was a major factor in gaining more support of the people. This built up the strength of the Nazi Party and the beginnings of paramilitary systems were operated to defeat the rivals through violence. Propaganda was also used to target the misery of the German people, and was aimed to stir up people's emotions. It gave the impression of strength and order that the Nazi Party would bring. Notably, it made the Jews seem as if they were the scapegoats for all of Germany's problems, which predictably led to hatred of Jewish people as well as hatred and fear of Communism too. ...read more.

The Nazi ideas were straightforward and appealed to a variety of sects in society as they promised jobs to the workers as well as land and food to the farmers. Another pivotal factor in helping Hitler and the Nazis gain power was President Hindenburg in inviting Hitler to become Chancellor as they needed the Nazis to deal with the threat of the Communists. Hindenburg believed he could control Hitler and make use of his popularity to gain support for the government. Therefore, this gave Hitler the opportunity to take control of the government and become the dictator of Germany. Considering all of the factors that were involved in the rise of Hitler and the NSDAP, there are a few ways we can see why they were so successful. Some would say that Nazism was due to the circumstances after the First World War and the depression, forcing dictatorship on the people. Many Germans also felt unsettled and at a complete loss within themselves as they were unexpectedly hit by an economic and political crisis and sought after firm leadership and guidance. Therefore the people were emotionally engrossed with the voice of Hitler, who unquestionably had zealous determination. Moreover, after assessing all of the factors that led to their success, Nazism was not just the product of Hitler and his acknowledged talents as a speaker and propagandist alone; it echoed deeper trends of the German's reverence of authority and their previous failures to develop a democratic custom. Sneha 12R ...read more.