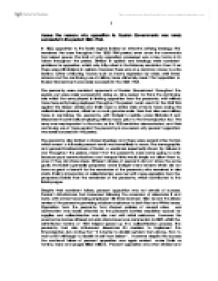 Assess the reasons why opposition to Russian Governments was rarely successful in the period 1855-1964.

Assess the reasons why opposition to Russian Governments was rarely successful in the period 1855-1964. In 1855, opposition to the Tsarist regime lacked an effective unifying ideology. This remained the case throughout the 1855-1964 period, even once the communists had seized power. The lack of unity opposition possessed was a key factor in its failure throughout the period. Division in opinion and ideology were consistent problems for opposition, which only fully united in the February revolution. Even then there were still divisions in opinion, however there was one common cause to unite behind. Other attributing factors such as heavy repression by rulers, well timed reforms and the continuing use of military force ultimately meant that opposition to Russian Governments was rarely successful in the 1855-1964. The peasantry were consistent opponents of Russian Government throughout the period, yet were rarely successful in doing so. One reason for this is the continuing role which the army played in limiting opposition from the peasantry, with military force frequently being deployed throughout the period. Lenin used it in the Civil War against the Green armies and Stalin used a similar style of brute force during the collectivisation process, albeit on a much grander scale. ...read more.

Military force was continually employed by the state, with Lenin crushing the Kronstadt mutiny in a similar effect to the Lena Goldfields massacre of 1912 and Bloody Sunday. The workers were controlled by the state throughout the period with Stalin's 5 year plans continuing the military discipline in the workplace which Lenin had introduced. Strikes under Alexander III in the 1880's did little to influence state policy. The revolutionary groups which became prominent in the 1870's lacked a unifying cause much like the peasantry and this often resulted in continual separation and division which limited their effectiveness. The Social Democrats had split into the Bolsheviks and Mensheviks in the same way that Land and Liberty had previously split into the Black Repartition and the People's Will. Again, these domestic opponents did enjoy some success. Not just the 1917 revolution, but also the concessions made in the October Manifesto and the assassination of Alexander II by the People's Will. All shared a common theme in that they were successes in the short term, but did not go according to plan in the long term. The deposition of the Provisional Government removed any possibility of a democratic Russia and the assassination had previously removed any chance of a constitutional monarchy. ...read more.

The threat of death, exile and imprisonment was used by the Russian state throughout the period, with Lenin intensifying Tsarist repression following a brief relaxation in Nicholas II's 1905 concessions. The failure of the Kronstadt mutiny demonstrated communist intolerance for opposition which Stalin would go on to intensify. Despite relaxation under Khrushchev, Stalinist repression had wiped out any opponents with similar effect to Alexander III and Lenin's use of the Okhrana and Cheka respectively. Unlike Tsarist Governments where repression had provoked opposition and increased tensions, repression and clever use of propaganda under communist Governments removed any possibility of opposition succeeding. Opposition to Russian Governments throughout the 1855-1964 period was rarely successful, whether it came from the peasantry, the intelligentsia, the workers or overseas. Heavy use of repression and the continuing deployment of military force were key factors, as was the clever use of propaganda by communist Governments in particular, such as the cult of Stalin. Even when opposition to Russian Government had succeeded, such as the removal of Nicholas II and the Provisional Government or the assassination of Alexander II, the events that followed were not successes as opponents had hoped for. In addition to Government intervention and reform, opposition consistently lacked a shared ideology and a common cause, so it was rarely successful throughout the 1855-1964 period. ?? ?? ?? ?? 1 ...read more.