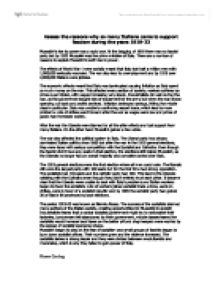 Assess the reasons why so many Italians came to support fascism during the years 1919-22 Mussolini's rise to power was a rapid one. At the begging of 1919 there was no fascist party but by 1922 Mussolini was the prime minister of Italy. There are a number of reasons to explain Mussolini's swift rise to power. The effects of World War 1 were socially meant that Italy lost half a million men with 1,000,000 seriously wounded. The war also lead to unemployment and by 1919 over 2,000,000 Italians were jobless. The economic effects meant that Italy was bankrupted causing Inflation as Italy spent so much money on the war. This affected every section of society; workers suffered as prices quad tripled, with wages increasing very slowly. Industrialists did well during the war, as the government bought lots of equipment for the army but when the war ended spending cut back and profits declined. Inflation destroyed savings, hitting the middle class in particular. Italy was unable to continuing export trade, which lead to more problems. Lots of strikes went forward after the war as wages were low and prices of goods had increased rapidly. After the war the Liberals were blamed for all the after effects and lost support from many Italians. On the other hand Mussolini gained a few votes. ...read more.

Italy felt cheated, humiliated, they wanted more, they had won a Mutilated victory and the Liberals were the culprits. In September 1919, a poet D'Annunzio lead an expeditionary force to conquer and seize the city of Fiume on the Dalmatian coast. Many of them wore black shirts of the Arditi. He organized frequent parades, made speeches from balconies and bullied opponents. Nationalists and ex-soldiers hailed him as the embodiment of the Italy they wanted to create. He managed to hold the city for a year, surviving by acts of piracy. By the Treaty of Rapallo, Italy and Yugoslavia agreed to establish Fiume as a free state. Eventually the Italians had enough of this nonsense and shelled his palace and Italian troops occupied Fiume, forcing D'Annunzio to abdicate. He had a strong influence on Mussolini, specifically on his oratorical style and became a national hero. The Treaty of Rome eased tensions by leaving Fiume in Italian hands but awarding its eastern suburb, Susak to Yugoslavia. Mussolini learns a lot from D'Annunzio including that he should have a disciplined organization and to keep them busy. He also learned the importance of propaganda and Mussolini was very influenced by D'Annunzio speeches. D'Annunzio showed him the way to achieve results was not to indulge in months of negotiations, but rather to act decisively and not to be afraid to use force. ...read more.

King Victor Emmanuel III, however, refused to sign the order. This meant that the army, which would have stopped Mussolini, was not called on to oppose the fascists. Mussolini, now confident of his control over events, was determined to accept nothing less than control of the government, and on October 29 the king asked him to become prime minister and form a cabinet. Traveling from Milan, Mussolini arrived in Rome where he formed a government on October 30. Some 25,000 Blackshirts were transported to the city, where they marched in a ceremonial triumphant parade on 31 October. The March on Rome was not the conquest of power that Mussolini later called it but rather a transfer of power within the framework of the constitution, a transfer made possible by the surrender of public authorities in the face of fascist intimidation. The king could have ordered his army to crush fascism but instead he let them carry on. He may have done this as he despised the socailsts and also thought he could Manipulate Mussoloni. Even though Mussolini gained power of italy, it was not by the elections but by force. In the May 1921 general elections, the Fascists only got 7% of the peoples votes, gaining 35 seats. The Italians didn't really have a reaction from March on Rome. This gives you the image that they didn't really care and thought Mussolini couldn't be worse than the Liberals. The Italians didn't vote for Mussolini but they were not aginst him. ?? ?? ?? ?? Kieran Cooling ...read more.